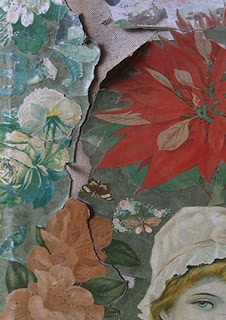 One wonders at the title as the music is anything but boring and, as well, "embroidery" connotes the superficial and unessential, also not qualities I'd assign to this release, which is almost overtly beautiful. The superficiality of beauty? Well, not to these ears. The label notes refer to Feldman and Tudor, reasonable points of reference, but I hear more explicitly John Tilbury. I could easily have been fooled, I think, were I told this was a construction of his for piano and electronics. By saying this, I don't mean to detract from the efforts of Cornford and Rodgers in the slightest--it's wonderful work. Slowly paced, with extreme care given to timbre, sounds that are soft but knife-edged, not ripping the space but slicing cleanly through, in complex arcs. The title continues to gnaw and forces you to think that perhaps the pair was trying to walk that thin line between the too pretty and a deeper beauty, choosing the luminous piano tones, for instance, almost on a dare, determining whether their (ahem) pulchritude could stand up to intense scrutiny on its own or slightly leavened by the (not overly) grittier electronics. Or perhaps I'm over-thinking it and it's simply very full, very warm music. It's also one of those that, as much as I love it, it seems pointless to go to deep into descriptives. Suffice it to say that if you enjoy the more contemplative portions of the Rowe/Tilbury/Prevost edition of AMM (and, really, who doesn't?), you'll have a splendid time with "Boring Embroidery". Get it. 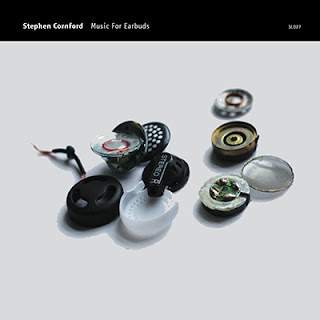 As if to upset the blissful feelings engendered by the above release, one of the pair offers a roughly synchronous selection of sounds that is miles away, though no less fascinating. Five tracks, constructed from "unprocessed acoustic recordings of the feedback between a single earbud headphone and a cassette walkman tape head." Whoda thunk? Maybe consider this to be a distant cousin of Toshi's nimb with a similarly incredible audio range and here, crucially, wielded in pared-down fashion by Cornford, allowing the surprising depths of each sound field to become apparent. Each of the cuts inhabits a different world: a grating, slippery whirpool, endlessly tracing a veering ellipse; a high, transparent keen, also circling but next to impossible to discern clearly (very beautiful); a looser, wetter version of the first, dizzily careening; a splintery array of razor-like needles, rotating but also spewing acid. These four surround the central, and longest track (15 minutes), a rather astounding faunal trompe d'oreille wherein one hears all manner of birds, lizards, amphibians and insects. I can only imagine the glee Cornford must have experienced cobbling this world into existence. Does it last a tad long? Perhaps, but still you're forced to marvel at the slightly alien expanse that unfolds. Very enjoyable, often amazing stuff.

Did you know you can create short urls with AdFly and receive $$$$ for every click on your short urls.