(The following are items for which I was sent links, not discs. Thus, all have been listened to on my semi-adequate but by no means ideal Macbook Pro speakers. Caveat emptor.)

I think the words in the title are intentional misspellings of the French for vagabonds and malefactors, but I'm not sure...This is a 20-minute composition using as its source field recordings made by Cédric Peyronnet of the area around the Taurion River in central France, near Limoges. The recordings themselves seem to be very straightforward, including insects, birds, rain, passing airplanes and, of course, the multiple sounds of the river water itself. As far as that goes, it's reminiscent, necessarily, of Annea Lockwood's various riverine studies. Nogray has assembled sequences into a piece, not an unusual thing in and of itself, but I get the feeling that he's generated a more interesting field than a straight reading of the recordings would have offered; Lockwood's work, for instance, often strikes me as somewhat attractive but ultimately bland as well as being something I could do for myself. Nogray begins with the fauna, moves through thunder and rushing water, moving naturally and seamlessly between sonic spaces. It's quite subtle; it took several listens for me to hear the gradations, to not just accept things at face value. The arc becomes more apparent and the sonic layers become clearer, the individual sound-types etched with precision. I still have something of a qualm with regard to the standard kind of elements in use here but, given these restrictions (this project was undertaken by 18 musicians, each using Peyronnet's recordings), Nogry has created an interesting and often captivating document. 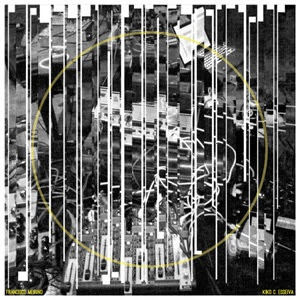 A split LP. Meirino's piece, "Focus on Nothing" is a solid, dystopic, industrial soundscape, referencing noise but widely varied in dynamics and pacing. The sounds employed tend toward the harsh, replete with hollow, metallic scrapes, shudders and bangs, sometimes pulsed, casting a rich though gray pall, always sharply etched; no haze here. Near the beginning, there's much flutter of activity, like an old, creaking factory starting to churn its gears after a long period of inactivity. That burst seems to carry the remainder, taking the energy then dissipating it, the sputters growing gradually less frequent until the whole affair simply ceases. A fine work, bleak and fascinating.

I'm less fond of Esseiva's "Nothing on Focus", where the sounds, essentially not that different from those used by Meirino, are assembled in a more random, less cohesive manner, seeming to owe more to early tape collage music, that of the kitchen sink approach. Sounds often seem to have been chosen for stereo effect or spaciness. Not bad, just less convincing to these ears, less immersive, more technical. I would have liked to have heard a narrower sound range, investigated more deeply.