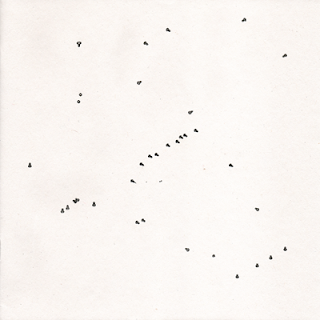 OK, pretty excellent title...lovely cover and interior illustrations as well. My first exposure, I think, to Leguay who, per the label press release, seems to operate on the conceptual edge of noise, perpetrating art along the lines of destroying a microphone, etc. Here, the sound sources are electronic playback machines of various kinds (the track titles equalling their model numbers), specifically the interior noises they produce while in operation, a not-unknown tack investigated (among others) by Keith Rowe when he finally added a mac to his table but, instead of using programs, close mic'd the machine's body finding the sounds produced within more interesting than those produced by software.

And...it's pretty damn good! A Sony Walkman (D-NE1) provides the material for three pieces, much less harsh than I might have expected, a resonant hum of two deep pitches interfered with by short static bursts which occasionally cascade into a bit of a flurry. It's blunt, very matter of fact, but handled by Leguay in a manner that straddles that awkward.graceful line, something I quite enjoy. It's second appearance, far more brief, finds a different range of sound, lighter and wispy alongside several strands of rumbling static and some loopiness. More active, lending a cartoon-like quality to the affair, doubtless unintentional. Its last entry is more varied and expansive, with flutter that softly undergirds rising and falling gentle whines and the requisite squelches and knocks; quite attractive! The Tascam CD-601 is plundered once, yielding a steady percolation of metallic and plastic clicks over a faint but fascinating background hum while the same company's DAP1 DAT recorder offers a grainier substrate, more dangerous sounding, the voltage seeming all but uncontrollable; both are very fine. Back to Sony for exploitation of its TCM-5000EV tape recorder, wherein we hear the most repetitive sounds, a layering of them, somehow subtly gaining momentum, some stationary, dropping out, reappearing in altered guise. Of the product-named tracks, all of them good, this is my favorite, a fantastic, alien mini-landscape.

The disc closes with a 14-minute live work, again an excellent chunk of music, ranging from initial quasi-syncopation (just the slightest hint of funkiness), ultimately finding drone territory, but a singularly rich one, with a low, scaly throb slowly cycling beneath a pebbly, iterating coating. He then just turns of the off switch and matters quickly and rudely dwindle to nil.

Fine stuff, another wonderful release from Consumer Waste. Hear it. 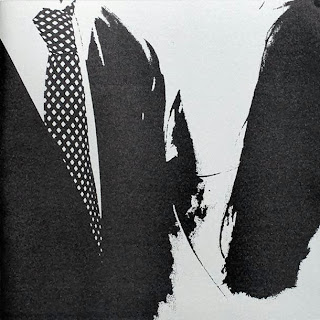 A vinyl release by the Italian quartet of Filippo Ciavoli Cortelli (percussion, tapes), Alberto Picchi (electronics), Andrea Borghi (bass) and Nicola Quiriconi (voice) containing seven shortish tracks that might be classified as spooky, industrial drones. "Drones" for the obvious reason that the tones are largely extended throughout the length of the given piece, "industrial" in that there's an attractive layer of grime over everything, a dark, oily, gritty sheen and "spooky" because, well, the combination of elements tends toward the harrowing, easily allowing the listener to picture him/herself in a large, shadowy, possibly vacant and threatening space. Sometimes, as toward the middle of "Molize", super-slow, rocklike death chords come a-crashing but mostly the sounds slowly ooze by in an airborne miasma, probably not safe to breathe. Though a vocalist is credited, his contributions are, to me, indistinguishable from the other instruments, probably a good thing in this context. It not my favorite sort of approach and it's a bit too much the same over its course, but if the dimmer realms of isolationism are your thing, you'll find a nice, gloomy swamp here in which to bathe.