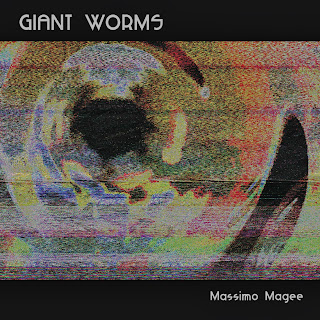 A complex experience, this. Magee has created a series of eight "snapshots" in three formats: audio, visual and text. The digital information for each piece, across all formats, is exactly the same. Exactly. So the audio file, if reduced to bitmap form (I think I have this right, but probably not) is exactly equivalent to the analogous visual file and each are exactly equivalent to the text file. I'm a little hampered insofar as experiencing this as seamless as I might like given that the CD drive in my Macbook is non-functional, so I looked at the images and texts on Betsy's old Imac but had trouble concurrently running the audio there, hence taking the disc back to my CD player for that. Given all of that...

I'm guessing the audio files involve some amount of feedback from the visual and text ones; to some extent, they're based on Magee's soprano sax work, but this has been overlaid and, I think, transfigured by feeding it through various electronic programs so that the final result references both while lying in the middle. So much of the "language" and inflections are reed-centered though there tends to be a pulsing, staticky element that's just as prominent (much of the electronics here involves rhythmic patterns of one kind or another) and it's often difficult to tell from whence a given sequence has been sourced. It's not easy music, possessing a kind of alien quality, though with the odd spark of surprising beauty (a rapidly repeating, high, bell-like tone in the sixth track, for instance, has a plaintive aspect amongst all the furious, machinelike ratcheting). There are even little "themes" that reappear from time to time between tracks, lending a smidgen of familiarity to the otherwise harsh and unyielding soundscape. I like it pretty well, grim as I find it to be.

I can't get so much into any kind of "following along" with the visuals and texts, more just finding it as a somewhat interesting instance of fact: that this image or this series of typographical symbols are indeed what the sound files look like when translated into this medium. One can see something of a relationship to the music in the visual files (all very interesting and attractive on their own) in that amid all the raster effects, one can see embedded "naturalistic" forms, distorted and otherwise masked though they be, which I think of as cousins to the saxophonics audible in the music. The text files are more abstract, impossible for me to "decipher" at all, though perhaps others are more adept at this.

Credit Magee with pursuing an unusual and interesting tack here. Perhaps systems more powerful than my own can present this in a true multimedia fashion; if not, I'd look forward to the time when it's more feasible to have all the elements overlapping, intersecting, etc., wherein one can get a truer sense of the underlying equivalency. Until then, give this a try.