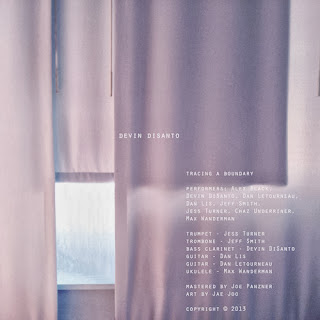 The initial recording from Disanto, a Chicago-based composer and an engagingly audacious one at that. Looking at the credits, one sees a sextet of three horns (Jess Turner, trumpet; Jeff Smith, trombone; Disanto, bass clarinet) and three strings (Dan Lis, and Dan Letourneau, guitars; Max Wanderman, ukelele), summoning to mind a fairly rich small ensemble, but you'll be hard pressed to pick them out during most of the composition, something that tickles this listener. To be sure, amidst the field recording (or field recordings--I get the impression there may be several sources, layered), the instruments leak through, somewhat reminiscent of the sine tones in Pisaro's "Transparent City" series, something that seems to be a touch point. The ambient sound is urban, including traffic, the predominant noise a difficult to decipher, ongoing clatter, as of wooden boxes of hard materials being shifted about, crumpled thick paper, infiltrated by steam-like bursts which may well be the horns. No human voices though, aside from the very intrusive one (Disanto?) that periodically, prefaced by an electronic beep, announces, "Two minutes, thirty seconds", "Eight minutes", etc. at several points during the composition. As jarring as these interruptions are, I find them apposite and oddly welcome, breaking up the flow in a welcome manner that adds an unexpected, if sporadic, layer. Elsewhere, the instruments glimmer through every few minutes, sometimes gentle, faint guitar chords (reminding me, in parts, of Burkhard Stangl). Zippers are zipped, keys dropped, all in heightened, high-focus detail, the soft instrumental passages phasing through like slow, distant searchlights. Wandelweiserian in form, Disanto's composition pushes out from there into bumpier territory, maintaing the reticence on the one hand but allowing for a certain amount of rudeness on the other. It's a great balance and "Tracing a Boundary" is a bracing work. I'm greatly looking forward to hearing more.

I don't believe Task has a website of its own yet; in the meantime, check here 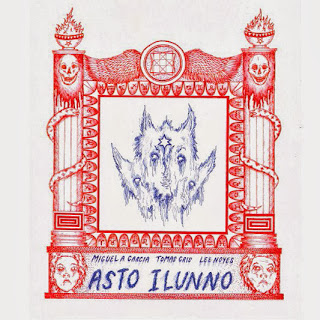 A Celtic goddess of the dawn? That was one of the rare hits I received when running Asto Illuno through Google. In any case, we have a brief (30+ minutes) trio excursion into AMMish territory from Garcia (electronics), Gris (objects) and Noyes (piano). It's much more subdued than I would have guessed going in, beginning with pointillist probing, expanding to twitters and short pulses. resisting long tones but assuredly retaining the flow. The dynamics gradually increase as does the density of the sound, the pulses growing harsher though the piano correspondingly works low and calm, gruffly anchoring things. The essential structure follows the traditional AMM arc, something that has long since become almost routine yet, when performed with a combination of sensitivity and imagination, as is the case here, still has the ability to satisfy. The (seemingly) cracked electronics offers a broken mirror to the piano, the trio negotiating that rise and fall quite well before amusingly falling to pieces in the past couple of minutes in a tangle of boops, bleeps and bangs. A solid, thoroughly enjoyable recording. 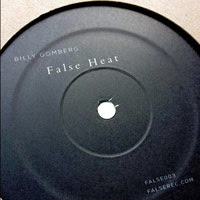 Gomberg's music, to the extent I've encountered it, has always been overtly engaging, almost too much so, like an irresistible candy that you initially chide yourself for enjoying its excess sweetness but, dammit, it's good and you eventually come to realize the faint bitter strains that give it its power. In that sense, he often reminds me of Fennesz in his prime. "False Heat" is no exception. Released on LP (I heard a digitized version), we have two sides of Gomberg's electronics. Side A, which I think is a real-time improvisation, opens with a hyper-low tone, splaying into several layers of varying pitches, textures and wobbliness, all in an interwoven, multi-thread drone. At heart, the elements are not uncommon at all but the placement is very fine, the choices made just right. I've been (for the umpteenth time) looking at Eggleston a great deal recently and the "normalcy" of his photos--not normal at all--seem to have some resonance with this music. Talk about sweet, Side B's opening drone is chocolate salt water taffy. It unspools slowly, the piece taking on a hazier character than the first, with some welcome sour tones slicing through the molasses. Much of the second half of the work is infused with sounds very reminiscent of throat singing--visions of David Hyke's Harmonic Choir thrust themselves to the foreground but, sweet as this music is, it has none of the saccharine quality of that ilk. A sensuous bath, well worth the subsequent trip to the dentist.