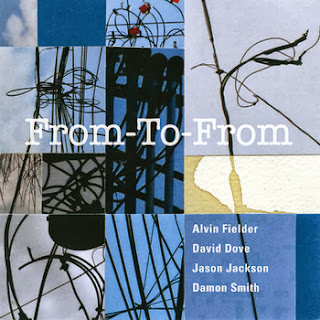 Readers know my problematic relationship with jazz post-1980 or so, especially that branch which styles itself as "free" but to my ears is often anything but, rarely recapturing the excitement, visceral and intellectual, of the AACM in its prime, Taylor, what-have-you. I understand exceptions will always exist and while I operate under the assumption that, all things considered, it's not worth wading through that particular morass on the off-chance of locating a jewel, things wend their way to me and I'm usually more than willing to give a fair listen. Sometimes you get lucky.

Though I've only encountered his post-60s work sporadically, I've always enjoyed Alvin Fielder. Fielder strikes me as the spine of this quartet (with David Dove on trombone, Jason Jackson on alto, tenor and baritone and Damon Smith on double bass). 77 years old at the time of the recoding, his work throughout is consistently alove and inventive,, "free" in non-obvious ways, nothing routine. His sensibility often recalls Blackwell, always a great thing for this listener. The music itself ahres much of this conception as well; themes arise, though they tend to do so subtly, but usually dissipate into group playing. There are solos, more or less, but you never get the sense of the kind of stagnant theme/solos/theme structure that I've heard all too often in much purportedly free music of the last couple of decades. Jackson will begin playing only to find, less than a minute later, that Dove enters in. As well, Fielder and Smith don't engage in "support"--that age old idea of Ornette's that rarely receives more than lip service, where the rhythm section is on equal footing with the horns, is always the case here. Again though, for me, it's Fielder who keeps things moving, who stirs the kettle so that nothing stick to the bottom. Jackson, apparently a fairly young player, wears his influences openly on the one hand (I hear Shepp and McPhee among others) but also has his own sound, a wide, roaring one, like a more soulful Gustafsson. I don't recall if I've ever heard Dove's trombone work before (I know of him more as a music organizer); Rudd is clearly in his sound but he also creates his own world and has a good knack for note distribution. This is busy music, no doubt, but manages to remain very fluid (Fielder again), never really treading water. There are moment, like midway through the title track, where I'm reminded of an old favorite band, the mid-70s Shepp group with Charles Majid Greenlee, Cameron Brown and Beaver Harris (where's Burrell?). I don't mean that as a backhanded compliment--I think generating that level of music in 2013 is no mean feat.

A solid, all around vigorous and enjoyable recording. 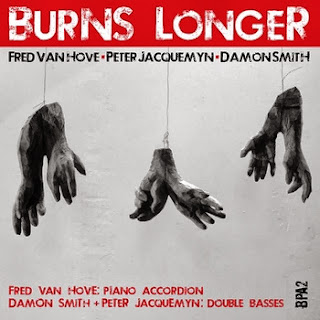 Van Hove is another old master (about 71 at the tome of this live 2008 recording) with whom I have only partial familiarity. The early FMP sides, sure, and I had a relatively hard to find (in the US) Musica Libera Belgicae LP that dated from the mid 70s, iirc. There may have been more hearings, not sure. In any case, here, on both piano and accordion, he's joined by bassists Smith and Jacquemyn, the latter also new to me.

The music on this date is more along the lines of that which no longer interests me. Van Hove, on piano, is certainly able but I both don't hear very much to separate him out from any number of free pianists (particularly Europeans, that gargantuan debt to Cecil still weighing heavily) and, moreover, it sounds fairly indistinguishable in essence from much quasi-similar work over the past four or more decades. It's very well played, don't get me wrong, but imparts a bit of "going through the motions", something that the prior recording somehow lacked. On the first of three tracks, the trio create a non-stop torrent for 28 minutes, the bassists bowing aggressively, filling the space and producing (in me) the claustrophobic feeling I get from much similar music; what many find "ecstatic", I find cloying and self-involved. The ten minute second track is only slightly less dense but again, I get that old sense, a la Malfatti, that one isn't any longer permitted to "not play". When Van Hove whips out the trusty squeezebox for the first few minutes of the lengthy final piece, things are mitigated somewhat, the relatively long wheezes coming as a relief, perhaps inducing the bassists toward less freneticism as well. It's my favorite cut here but still, the de rigueur relentlessness that eventuates becomes tiring. I always pick up a closing of doors rather than an opening. Of course, your mileage may vary but I find it instructive, if difficult to quantify, that I really don't pick up more than a trace of the same in the Fielder session, one that strikes me as far more "free" in a fundamental sense. I should mention that these are digital-only releases and I've been listening over my Macbook which, while not too bad, surely negates some of the richer sonics (especially, I'm guessing, that from the basses)[correction: "From to From is also available on CD]. Still, it's the structure that seems important to me and while I hear most of the first as flexible and, for lack of a better phrase, aware of the outside world, the Belgian recording hits me as overly hermetic. FMP nostalgists will doubtless disagree. See for yourself.

When will your relationship w/the music you're currently listening end?

I love it when Uli pops in!