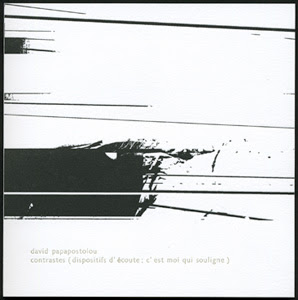 A very intriguing, pared down, almost brutalist, in a way, offering. "Contrast" indeed is the order of the day. The disc is divided into three tracks, all clocking in at 13:39, but that division seems arbitrary enough. The elements are clear: sine tones of a relatively forceful character; a field recording that seems semi-urban, some old-sounding metallic mechanism, hard to say, along with birds and automotive engines in the distance; and silence. The audible parts are presented sometimes separately, sometimes overlapping, the silences occurring at unpredictable points, occasionally lengthy. That's all. But it's plenty. This approach appeals to me very much, taking a handful of elements, allowing a small of amount of variation (in two of them here: the field recording varies as one would expect in a natural environment while the sine changes amplitude and pitch) and arraying them, either using a system to do so, one's poetic sensibility or using some kind of randomizing process. The result here implies the latter to me, though I could be wrong. I enjoy the inherent qualities of the recording, its own mixture of sounds wherein metal bangs, some vague sense of liquid, ambient hum, birds and motors coexist in a sonic web that would be a delight to experience on its own. The sines are more intense than one normally encounters, once or twice branching into pairs, not sliding through the natural sounds, a la "Transparent City" but overlaid like thin bands of brilliant color. Within this the blocks of silence are quite visceral and solid, cutting the noise abruptly and completely, acquiring a kind of shape on their own. As said above, this seems on the verge of brutal, something of a velvet hammer attack. Excellent work. 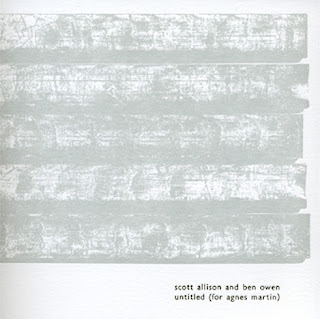 Two of the five tracks here were released on a 7" in 2008; I take it the other three date from the same period. The music is a combination of field recordings and electronics, the former of an urban nature, the latter a bit more overt--quick spurts of static or keening shards--than one associates with Owen (if he's the source). Perhaps it's the citation of Martin, whose gray wash works are special favorites of mind, but on pieces like the first, I pick up a hazy, muted overcast feeling here, low cloud cover hovering over an industrial setting. Wonderful, soft metallic tapping toward the end here. While this general character is maintained, one has the impression of moving around into different areas of the environment, so that the third track, for example, places one in room of hums of varying pitches though again you (at least I) have a sense of being in a space where the sounds are enveloping, not just issuing from an isolated source. The fourth maybe venture inside one of those machines, with up-close clatter and a claustrophobic, pervasive hum. A huge slab o'hum is served up on the final cut, almost obliterating all in its path, save for a continuous ratcheting kind of sound. But then there's a delightful sprinkling of voices, from a distance, a really nice bit of spice, before the sounds begin to fade, then abruptly cease. Very satisfying.