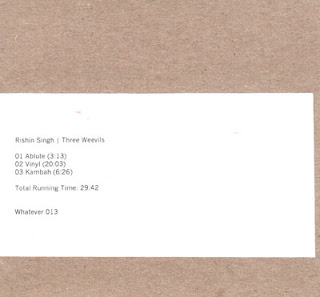 A well-structured, tight and fine recording from Singh. I believe this is my first exposure to his work and I don't know much of anything about him--I'll just guess he knows his Malfatti. He deploys his trombone in a related manner, unfurling long, steady tones, though somewhat more forcefully than the wily Austrian. Here, two briefer, more (relatively) rambunctious pieces bracket a longer one, though all have the same basic attack: the horn played amidst environmental recordings. "Ablute", a verb meaning "to wash", contains low, pure tones against a dark, hollow-sounding field, like a very large, vibrating tube. It's quite dramatic in and of itself and opens into the 20-minute "Vinyl" which, true to its title, consists simply and very attractively of a soft vinyl rotation, nothing you haven't, more or less, heard before yet still very inviting in its plainness. Atop this, Singh, every so often, offers a quiet tone. His attack is less subtle than Mallfatti's, more abrupt, but at the same time perhaps less self-conscious, more matter of fact. He's very unobtrusive, often leaving several minutes of needle between wafts of tromboneliness. I like it a lot. Finally, Kambah (I take it the sounds were recorded in the Canberra suburb of the same name) offers a dense, channeled/chaotic flow of urban sound, probably w th some horn nestled in there somewhere, though I'll be damned if I can tease it out. On the label site, Singh refers to himself as "soluble"--very nice.

A good, tough, no-nonsense work. Check it out. 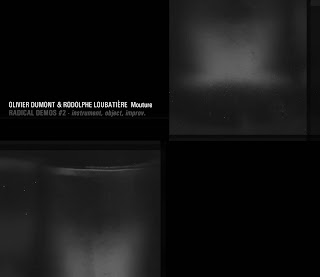 Two tracks from Dumont (guitar, objects) and Loubatière (snare drum). Can't swing a dead cat without hitting objects and snare drums these days. I'm pretty sure the first time I saw a snare used by itself (aside from some wonderful Max Roach moments) was at the hands of the great Sean Meehan, in duo with Toshi Nakamura at ABCNoRio. It certainly spoiled me. There's no reason, of course, to only use it in a quiet manner but, to my ears, it lends itself so well to that approach, has so much to offer therein, that when attacked more aggressively, I can be, perhaps unfairly, put off somewhat. "Side A" (so titled though there's no LP or cassette release of which I'm aware) begins in semi-AMMish territory with low rattle 'n' hum but soon Loubatière takes bow to snare and that sets the eventual tone. There's a quiet period with a dull, distant drone overlaid by rubbed taps, like wet fingers pressed into drum skin and it's very effective--dark and dystopic. The mood unravels a bit however, the sounds becoming less focussed and, again, veering into that "bowed" area (I'm not certain of the actual means of production here, but it has the same feel) that's so difficult to maintain. The interest level fluctuates but, overall, there's too much activity that becomes treading of water, an instance where shortening would have been highly beneficial. It's a tough balance and the dup teeters on the edge of some good things but just lacking, to these ears, some degree of concision. "Side B" begins quite seductively, with liquid, rolling sounds from the guitar and mini-barrages from the drums--very active, yes, but with purpose, possessing a nice careening quality. But again, focus is lost and the excess of activity doesn't quite compensate. Again, the drum bowing (I think) is prominent and, as is the case in players as otherwise masterful as Prevost, its really hard to integrate. As in the first piece, solid moments are achieved but evaporate too quickly. Maybe that's enough. I wanted to hear more space, more grace.