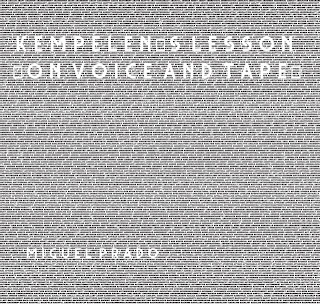 Wolfgang von Kempelen is well-known for constructing, around 1770, a contraption called "The Turk", a [purported automaton capable of playing chess (in fact, a human was secreted within). Alesser known, though more truthful invention of his was the Speaking Machine, a device rather rudimentary by modern standards, consisting of a bellows, a read and resonating chamber, but impressive enough in its day. Which "Kempelen" is being referred to in the title of this 7", 45rpm vinyl (lathe cut by Peter King, limited edition of 50) might be an interesting question, given Prado's tendency to prod and poke the often soft underbelly of contemporary improvisation. From the titles, one assumes that the speaking machine is the reference, but I wonder..."Criptolalia" (more often, "Cryptolalia"), is "the use of obscure (or private) language", an easily enough applied observation on this scene while "glossolalia"--well, I needn't elaborate. (The full title of the track is "Glossolalia-Laden"; if "laden" is German, not English, the translation is "load"). The fine print forming the graphic basis of the wraparound cover consists of words, alphabetically arranged from "aberrant" to "cirrocumulus".

The sounds? They seem to be tape splices from disparate sources--snatches of voices, warped, older soundtrack recordings, feathery static, vinyl...the release note cites Berkeley: "the ghost of departed quantities" and there is, to my ears, something of that here, as though Prado is manipulating a device capable of, sporadically and without clarity, honing in on sounds that transpired in a room in times past. The ten minutes on the two sides (I listened via download) are perhaps more subdued than one expects from Prado and flow in a very enticing, unforced way, very mysterious, as though he'd simply turned on a device that captured some ongoing, obscure and partial input. I could have listened far longer, engaged in some auralalia. Good stuff.