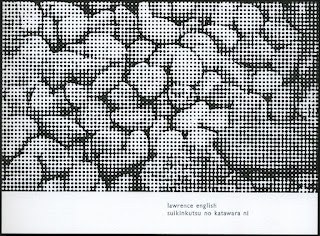 A suikinkutsu is an inverted, buried pot, usually ceramic, into which water is dripped through a small hole, the resultant tones having an aspect somewhere between a bell and a koto. English (whose work I haven't heard in quite a while, a condition I'm happy to have remedied) made these recordings between 2003 and 2011, I take it at various locations in Japan and Australia. The nine pieces are "unprocessed" field recordings which means that apart from the utterly beautiful sounds from the suikinkutsus themselves, you hear the general ambience as well, which might be birds and wind on one track, motor vehicles on another. This strikes me as crucial, to embed the resonant pings and drips into their environment, though with substantial separation, very much as though you were sitting or lying next to the suikinkutsu, the other sounds at some distance overhead or some paces away. I have to say, I could listen to work like this for hours. The drops consistently skirt that delicious line between regularity and randomness, the sounds themselves varying within seemingly narrow parameters that are anything but. Peaceful, yes, not absolutely unhazy--sharp, clear and calm. Listeners who don't know English's work but enjoy, say, Jeph Jerman, would do well do pick this up. Anyone should, really. It's a wonderful, special recording. 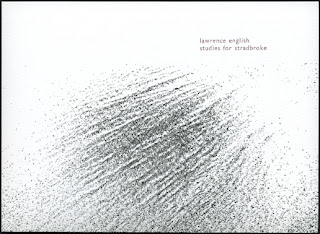 A set of hydrophonic recordings made in 2007 on Stradbroke Island off of Brisbane (I take it this is a re-release of some kind). Interesting to listen to after the above album. It, obviously, doesn't have the same concision with regard to sound source, yet there are almost necessarily certain parallel references in the musical dripping of water. One's aural footing is less certain, but the sounds are no less enthralling. They're often mysterious but, as with the suikinkutsu recordings, crystal clear, imparting thereby a more dreamlike character. One tries to map the low rumblings and bumpings of the second track to its title, "reeds of brown lake", and by doing so miniaturizes oneself to water strider size sounds so described might be perceived as such. There's also that fascinating point where hyper-detailed recording of water begins to sound like fire crackling, as on "rock walls" here. I might prefer the prior release, if only because of my deep affinity with the basic sound, but this one is marvelous as well, a fine example of specificity in field recording and testament to English's ear. 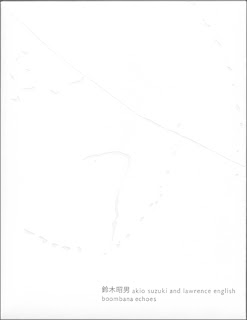 Another older session, this one a 20-minute mini-cd from 2005, but without the staying power of the previous two, at least to these ears. Suzuki uses his self-created analapos (for a brief demonstration of which, see here) and English (field recordings, drum, electronics) seems to tailor his sounds to mesh with that instruments echoey qualities. It sounds as though a voice is used periodically here, perhaps funneled through the analapos? The effect is something akin to Jon Hassell's trumpet work from a few decades back, though the context is looser here, no rhythms to bear it along. Still, that's better than the hollow vocals, presumably Suzuki, on "manorina melanophrys", where what sees as though intended as childlike, sing-song innocence falls flat. The washes of echo over everything blur matters past the interest stage for me. (Beautiful packaging, though, and three nice drawings by Suzuki are included).

So, the collaboration isn't my cuppa, but you've no excuse not to hear the other two--fine, fine material.