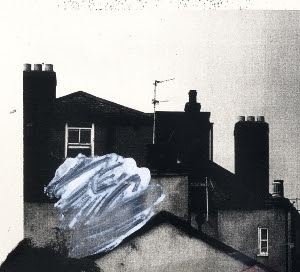 Patrick Farmer/David Lacey - Pictures of Men (Copy for Your Records)

I'm guessing if you surveyed field recordings issued over the last ten or so years, especially those created by musicians not exclusively involved in that area, insects would be over-represented in the animal sounds category. Birds too, perhaps. Distant dogs are always good to lend a sense of space, even of desolation. btw, if there's not an indie rock band called Distant Dogs, there should be. But we don't get nearly enough pigs. Until now.

Perhaps meant ironically, "Pictures of Men" commences with five or more minutes of wonderfully snorting, slimy, guffawing pigs, accompanied by a horde of geese in some state of upset. Maybe Farmer's merely capitalizing on the latent potential in his surname. Whatever the case, it's a welcome and wonderful sound world and it sticks out its collective snout a couple of times further in. When a sine-like tone enters, you can't help but think it a wry comment on Michael Pisaro's careful and beautiful insertions of sines into field recordings ("Transparent City"), attempting to approximate some basic tone in the wind, etc. Things do move on, more or less in a manner I tend to think of as cinematic. That is, it's easy to visualize scenes accompanying the music, as rough and tumble and differentiated as they are. There's an attractive sort of lurching quality to it, as one hears trains (here, an engagingly loose sound) hiccuping against brief silent swatches, massive flocks of birds (again, presented in a way not normally heard, hear a dense layering of reedy whistles), and a helluva lot more. Farmer and Lacey do a really fine job at melding dynamic levels, textural variation and "tempo" changes; it's active, even hurtling, picking up the listener and carrying him/her along, offering tantalizing glimpses of activity along the shoreline, lingering for perhaps a moment then flowing on.

About midway through, they shift gears, beginning with a lovely, soft, burred drone, eventually interrupted by harsh static--seriously harsh at points. Thee's a more fragmentary feel in effect at this point, a quiet, stubborn hum amongst random(ish) taps and clangs, rather desolate; a skittering sound that appears is like an abandoned robotic insect, helplessly flitting about the floor and windows. Matters slowly begin to congeal somewhat, the menagerie returns, automotive noises intrude, the flow stutters again (beautifully, with ratcheting, gear-like sounds) before it suddenly flattens out into a landscape abutting an airport, planes ascending just overhead, water nearby. Waiting for pigs and geese.