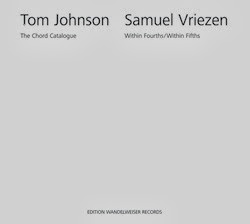 When I first began reading the Village Voice, around 1972, Tom Johnson was its new music critic. By and large, the music he wrote about was entirely unfamiliar to me; I learned a good bit and, I'm pretty sure, missed a huge amount more, not having any kind of point of reference at the time. I think I came across his writing here and there in the ensuing years but I'm pretty sure I never heard any of his own music until picking up "An Hour for Piano" on Lovely Music Ltd., in all likelihood because the pianist was Frederic Rzewski. I loved it. I'm not sure if it's because there was nothing else around from him (though, checking, I see that India Navigation released his "Nine Bells", which I don't think I've ever heard) but my next encounter was either with his entirely wonderful work, "Failing: A Very Difficult Piece for Solo String Bass" (Robert Black, on a Bang on the Can recording) or the "Rational Melodies" album on hatART (Eberhard Blum on flute), which I also loved. At this point, I began keeping an eye out for his work and, as I recall, the next thing I saw was his "The Chord Catalog" on XI, which I eagerly procured.

Well. Let me back up a bit. Johnson, to his credit, will say that he's less a composer than a list-maker, creating expositions, not compositions. He locates patterns that he finds fascinating for one reason or another, often for mathematical reasons or representative of tiling functions, etc., and seeks to create an aural image of them. Personally, I'm very partial to this kind of approach though, of course, there's the danger of a work becoming more science experiment than aesthesia, e.g. some of Alvin Lucier's compositions. "The Chord Catalog" is simply that: all the chords possible to play in a single octave, all 8,178 off them, played in order, from the 78 two-note chords to the one 13-note chord. Even so stated, I'm intrigued. But the reality, played by Johnson was...well, "opaque" would be an understatement. I tried. I really, really tried. But I simply couldn't find way in. Played without affect (appropriately), there was nothing for me to grasp onto. It was both dry and pugnacious and even though I figured it was me who was somehow missing something, I gave up. Humorously enough, a couple of years later my friend Walter Horn visited NYC from Boston. He handed me a copy of the same disc, saying that he couldn't stand it but thought I might like it!

So it went. Come the Net, I'd trawl around YouTube, occasionally checking to see what there might be from Johnson, finding the odd lovely work. Earlier this year, I found an extract of a performance of this beast, by Samuel Vriezen, a pianist and composer who I knew slightly from his work with Wandelweiser-related musicians. It was captivating. By simply (not so simple, I'm sure) taking the piece at a much faster clip (faster than Johnson's pianistic skills allowed him to do), it undergoes a substantial transformation wherein all sorts of patterns emerge. It's still something of a monolith, no doubt, but it's now an approachable one. Vriezen's note-rate seems to fluctuate between about 1 and 4 per second (very roughly), faster on the less voluminous chords, slower on the crowded ones. [edit. received a note from Vriezen correcting my perception of note rate: the tempo I used in the recording moves from quarter=138 down to 36 with a chord per sixteenth. So it goes from 9 or so chords per second to just over 2, rather than from 4 to 1.] I can only imagine how difficult this is to play, to be so precise, to maintain an exceptionally steady pace and dynamic level, but Vriezen copes magnificently. You hear all the threads, the rising scales within dense clusters, the shifts; there's actually drama imparted, though I think Johnson might scoff at such a notion. The just slightly off-center pyramidal structure--the first and 10th parts each contain 78 chords, first of two notes, latterly of eleven--is also somehow poignant and moving, the penultimate section with 13 twelve-note chords wistfully and ineluctably leading to the final, single example, all thirteen notes.

As if this unexpected pleasure weren't enough, we're also treated to Vriezen's own beautiful composition, "Within Fourths/Within Fifths", inspired by Johnson's body of work. A description of the piece as well as its score can be found here. While it shares a very similar mode of construction as "The Chord Catalog", both in its compilation of possible note configurations within a narrow field and the resultant quasi-logarithmic increase in products (here without the "decrease" on the other side, so no pyramidal form on the whole, though that form exists within each of the ten sections), by choosing such consonant chords and sustaining the notes on each, Vriezen immediately places the listener in a far more overtly gorgeous realm, one where it's easy to overlook any "catalog" aspect. The pace is slower (though consistent), about a chord per second, allowing these jewels to suspend for a tantalizing moment before disappearing. The effect is not dissimilar to Satie's music from the Rosicrucian period, works like the Ogives, with the same feeling of a processional in a Gothic church. It's hard to hear the progressions as non-intuitive, which is a wonderful illusion. Simply gorgeous sounds.

A great accomplishment on the art of both Johnson and Vriezen.

"By and large, the music he wrote about was entirely unfamiliar to me; I learned a good bit and, I'm pretty sure, missed a huge amount more, not having any kind of point of reference at the time. "

maybe you know this, just making sure, but the book collecting many of these columns, 'The Voice of New Music', is on the web for free:

knew about the book, didn't know it was available on-line, thanks.

When I spoke to Johnson at Souffle Continu, he mentioned that the publisher only wanted to include articles pertaining to American musicians hence (whether it may have been included otherwise, who knows?) the exclusion of the 1971 review of the AMM performance in Brooklyn.

That's right. We decided the book would only be about the evolution of American minimalism in this period, so Eliane Radigue and Luc Ferrari and other important European composers I wrote about were also eliminated. As noted, the book can also be downloaded on my website, Editions75.com, and since the material is now public domaine, you can also publish another edition or a Japanese translation if you want to.
Tom Johnson