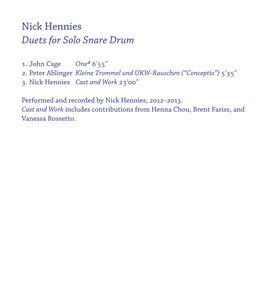 The "duets" on this fine and self-contradictorally titled release being, I take it, with silence (Cage's "One4"), noise (Peter Ablinger's "Kleine Trommel und UKW-Rauschen ('Concerto') and strings (Hennies' own, very spectacular, ("Cast and Work").

The description of "One4", written in 1990 for percussionist Fritz Hauser, is (from wiki), "6 time brackets for the left hand and 8 for the right. Each contains a numeral on a stave, referring to an instrument — the piece is to be performed on "cymbals and/or drums chosen by the drummer." Cage adds that the sounds produced should be either very long or very short." Hennies' rendition, covering seven minutes, is crisp and perfectly paced, using ample silence and mens of attack. Save for a tiny burst about halfway through (a welcome accent), the work is very restrained, almost proper, but carrying a good, steely determination, without the looseness (good or bad) you often hear in interpretations of the late number pieces. Hennies is a big fan of Alvin Lucier and this has something of what one might have expected had Lucier been the performer. Really strong.

I'd never heard of Peter Ablinger and one of the side-befits of this recording has been to correct that oversight. As near as I can determine, a "UKW-Rauschen" is an electronic device of some sort, not a terribly modern one. It explodes in a wall of dense static right from the beginning, overlapping off and on with rolls from the snare. Each instrument seems to have its own time blocks, roughly equal in duration but irregularly spaced, allowing for moments when both are present, one or the other and silence. It's a brutalist piece, no nonsense and, again, very strong and of perfect length at 5 1/2 minutes.

As excellent as those two compositions are, "Cast and Work" steals the show. A 23-minute piece in three sections, based on clock time. The first 15 minutes is Hennies using (I think) padded mallets on a snareless snare playing a steady not-quite-roll (I could be wrong, not knowing drum technique a whit--it sounds a bit slower than a roll to me). It's unvarying and monolithic in a sense, but it's the kind of pattern that, due to human limits and the essential sonorities of the drum tones, contains an absolute wealth of variation. Listened to attentively, you hear a whole range of tones, cross-rhythms and more. The drum is resonant within a tightly constricted space but within that volume, worlds exist. I could have listened to just that for hours. You even get the impression of tonal shifts, though I'm guessing that's more in my ears than the recording; perhaps there are more subtle aspects to the score involving moving closer to the rim or center of the drum at given intervals. At the 15-minute mark, all hell breaks loose as the paired cellos and single viola (again, guessing) of Henna Chou, Brent Fariss and Vanessa Rossetto hurtle to the forefront, sawing away with controlled abandon. It's entirely unexpected and perfectly apropos, a welcome tonic. Crucially, it forms its own block, lasting precisely five minutes, the snare beneath never having ceased and then returning, though bearing the subtlest of adornments, a sine tone (or similar) all but masked by the mallets, which are otherwise continuing as before. In the last minute of this three-minute section, you begin to become aware of a slight quavering sound which is revealed at 22:30 when the drums cease and the tone shimmers on its own for the final 30 seconds. A great work, one of the best things I've heard this year.

No excuses, get this.