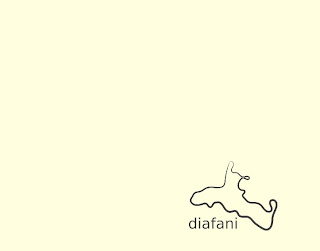 Two solo organ works, over an hour each, by Duplant, the first dedicated to Eva Maria Houben, the second to Jakob Ullmann (diafani is Houben's label). "là où nos rêves se forment", to Houben, begins as a kind of lighthouse-in-the-fog piece, the long tones emerging and disappearing into the mist. However Duplant is manipulating the organ to generate these sounds, what one hears is airy and slightly reedy, with muffled rumblings beneath. This steady state occupies the first 25 or so minutes, a slow kind of pulse, before matters bend slightly into a looser wash of tones, deepening somewhat, adding adjacent colors but remaining in the same general sound world just more amorphous and outward flowing. It eventually flattens out into a kind of shallow sea, eddying here and there. Good, contemplative work.

"là où nos rêves s'effacent", for Ullmann, uses sounds even further removed from what one might expect from an organ, similarly airy to those in the other piece but deeper and raspier, visited on occasion by single, very low booms (like massive plucked bass notes) and infiltrated by what sound for all the world like airplanes. There are a series of strong, dark surges, all of which lend a more brooding, churning nature to the piece. It's also a good piece though I think it could have been pared down from its hour length to something in the 40-35 minute range without losing anything; overall I prefer the work for Houben. Both have plenty of grain, though, Duplant managing the task of concentrating on a narrow stretch of the sound field while exposing levels of detail that alway maintain interest.

A strong release, certainly one to add to the collection of those who've been enjoying Duplant's music over the past few years. 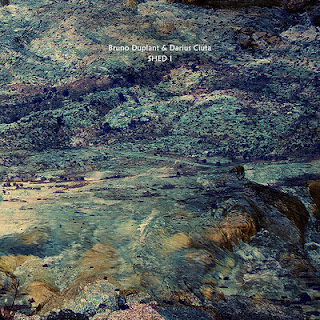 The follow-up to their recording on Mystery Sea, "Shed I" again finds this duo investigating the areas bordering both dark ambient and field recordings, a neighborhood with an industrial edge, acid-tinged, but inviting. The abandoned power plant feeling is enhanced by both the hollow hums and the soft, mechanically repeated sounds, sounding like the desultory operations of large machines at some distance, behind thick walls. Solitary metal scrapes in empty warehouses, the drones of fluorescent lighting, indications of dogs foraging--it's a dystopic image, possessing a layer of oily grime. It's very effective at what it does though it may be too much along the lines of various quasi-similar things heard from labels like Mystery Sea and Unfathomless for some. The dripping water, the low generator thrums and such begin to form their own sub-genre, one that's become quite populated in recent years. Still, "Shed I" is solid and fine of its type.