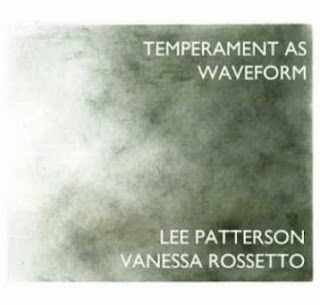 I think the first time I heard a recording by two individuals working remotely, corresponding electronically, was 1994's "Monogatari - Amino Argot" by Otomo Yoshihide and Carl Stone (just noticed I wrote it up for All Music Guide). The format has of course become quite common since then and has, I take it, evolved quite a bit from the simple sending of files with the kind of ABABAB back and forth which occurred in the Yoshihide/Stone album; I take it the interaction is richer and less "balanced" in that sense, or at least it can be. In any case...such was done here between Manchester, England and Austin, Texas and the results are superb.

The music, while not really dronish, is fairly steady state; even the quieter of the four pieces contains continuous sounds. Rossetto's viola can be clearly heard at times and is likely there in disguised form even more often while Patterson is doing whatever it is he does, though I don't detect any sizzling ovoids here. The opening track is extremely strong and rich, multiple layers of deep hums, revolving scrapes, metallic scouring and more, a massive drill burrowing through stone, really impressive. The second track begins with a low volume, churning mass -- good lava pit feel here, small elements solidifying, breaking off into slag. Lovely the way it fades to almost nothingness a couple of times only to well back, changed subtly, refiltered, ending in a great and unexpected low piano tone followed by stirring, dark string work. Great music, pushing to the edge of a kind of Romantic conception in a way, something always latent in Rossetto's work (if, indeed, she was primary source of this particular segment. "The highs and lows of cross-Atlantic collaboration" (:-)) is more fragmented, with odd, almost random elements entering now and then, though with a substrate, soft grainy noise, that holds the pops, grinds, near-choral samples (probably wrong on that one) and squeaks in place, soon giving way to recordings that include birds, traffic and such; not (the latter) so unusual but sounding wonderful. The closer, "an indication of presence", brings the dynamic level back up to where we began, though the flow is initially more troubled, clotted and a little frantic until Rossetto's dense, incredibly striated viola emerges, as though a dozen Tony Conrads had wandered into the space, the vast hum shrugging off splinters a harsh string scrapings, utterly filling the space, subsiding into a scratchy nest of rubbings and pings.

An inspired pairing resulting in a beautiful recording, despite the ocean between. 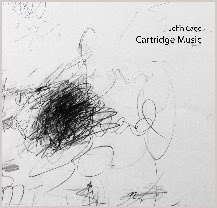 From 1960, the work is for pickups and contact mics, the score constructed by overlaying transparencies that map the players' paths and provide durational cues, if I understand correctly (which I may well not). The results, frequently, are not so distinguishable on a purely aural basis from certain kinds of improvisation, especially those of the rough-hewn and spare variety. One question that often occurs to me when listening to compositions like this is, how much depends on what we might (still) call the performer's virtuosity? Or, more pointedly, how much of prior knowledge as to the identity of the interpreter acts to weigh one's perception, evaluation and appreciation. I hear a David Tudor performance of the work and find it quite special and thrilling--is that because I know it's Tudor? Had I heard this one blindfolded and been misinformed that the musicians involved were Rowe, Wolff and Sachiko M, would I have heard it differently? I don't know but I don't discount that possibility.

In any case, I find myself relatively unable to get involved with this rendition. Maybe its due to the number of players and the (if one can go by the interior photos) wide-ranging variety of sound sources; I think, as is often the case, I might prefer fewer options delved into more deeply. The sound is rough, ragged, near-random s it "should" be, dynamically varying but, dare I say, excessively aimless? That could well have been the (a) goal. With Tudor, I impute a strong hand at the till, but perhaps that's an old-fashioned way to come at pieces like this. Here, it's fine but not gripping, maybe imparting too much the sense of performance on the one hand and, if so, less directionality than I'd want. I listened intently sometimes, distractedly other times, finding it penetrable but with not enough...mystery? verve? randomness?...to prick my ears. 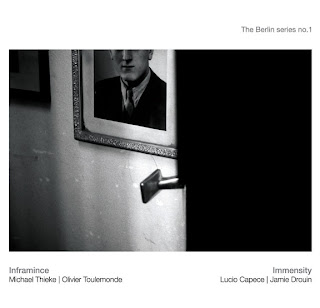 As the title indicates, this is the first in a planned series intended to document aspects of the Berlin scene; whether they'll be split affairs remains to be seen.

Two long tracks, 43+ and 36+ minutes respectively, the first featuring Thieke (clarinet) and Toulemonde (acoustic objects). The former's playing is maybe a bit harsher in tonality than what I've heard, live and on recording, from his work with The International Nothing (with Kai Fagaschinski), my main prior exposure to him. This is all to the good and he carves out fine, thick lines, microtonally tinged with Toulemonde gamely and adroitly contributing percussive sounds that circle the tones like thousands of irregularly spaced satellites. But interest just isn't sustained for the duration. They reach a certain point, maybe ten minutes in, where the next 20 minutes offers no deeper plumbing. Though one track, there's a pause after a half hour and what seems to be an entirely different improvisation begins. I take it Thieke is, at first, tapping at his instrument in some manner and Toulemonde is making very electronic-sounding noises acoustically, but in any case, it's a refreshing change of direction. The section evolves into some keening and scraping; not entirely absorbing but with much more meat in it than the earlier portion. A mixed bag, overall.

Not so the Capece/Drouin track, which I found unreservedly fantastic. Bass clarinet with preparations on the one hand, analog synth and radio on the other, each deployed masterfully. Like Malfatti, Capece (and, for all I know, Drouin as well) has the ability to operate, often, in a pretty highly circumscribed area and yet generate an amazing wealth of striking and fresh sounds. The first third or so runs more or less as one might expect: lone, quiet tones from Capece, gentle accompaniment from Drouin but then things switch up with some fine, discreetly bristling synth and coarser split notes on the bass clarinet--delicious combination. The music subsides into a silvery pool, laden with rasps, soft whistles, deep thrums. It nestles there and sizzles; again, occupying a limited space but offering so many small differences, so clearly etched as to be endlessly fascinating. A great set--hear it. 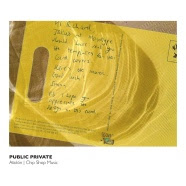 I guess it happens every so often but meetings of "bands" seems a bit uncommon, here the Atolón trio (Ruth Barberán, Alfredo Costa Monteiro, Ferran Fages) and the Chip Shop Music quartet (Erik Carlsson, Martin Küchen, David Lacey, Paul Vogel) offering two tracks, live and studio. One immediate plus: there's absolutely no sense of overcrowding, the new septet providing ample space in which to maneuver. The first track, the live one, begins very winningly, with chimes and burbles, spreads it self out without hurry, very relaxed. Too relaxed? well, maybe. At 43+ minutes, there's a sprawling tendency that offers less in the way of implied form than I'd like to hear; hard to quantify. The music is fine but doesn't feel especially notable. The "private" cut, at about half the length, is perhaps necessarily more succinct, tauter. The sounds possess a bit more urgency (it's wonderful to hear at least a snatch of Costa Monteiro's accordion sounding like an accordion, and Küchen's alto has some delicious moments), a greater sense of purpose as though they're striving to get somewhere. 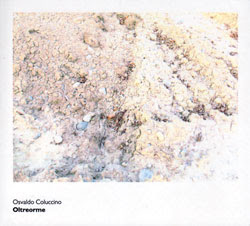 And then you get recordings like this one which seem so effortlessly beautiful...Solo, all "acoustic objects", played in a loosely percussive manner, softly. Softer still if you follow Coluccino's suggestion and turn the volume low. Sounds enter into the room, disappear; depending on your listening acuity, you may forget the disc is on for a minute or two. When they surface, I bet they sound as natural as whatever else is going on wherever you are. Nothing forced, nothing overly stressed, a fine willingness to withhold; reticent but not shy. If anything, some of Jeph Jerman's work is called to mind.

One of those recordings where it's tough to say much, worthless to describe but extremely enjoyable to experience. Coluccino isn't well known to me and I daresay many an eai fan but clearly should be. Check him out.