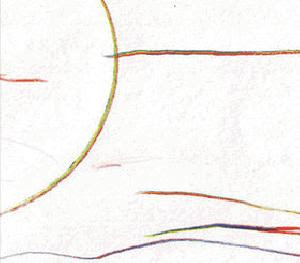 In January, 2013, Rowe and Lambkin met in New York City to perform together for the first time. Rowe had become familiar with Lambkin's work upon the release of the latter's "Salmon Run" a few years prior and knew both that he did a good bit of graphic work and that his live sets had a strong tendency toward various aspects of performance art, not necessarily "music" as such, to the extent the term still has meaning. So he thought that rather than toting along his usual gear he'd bring drawing materials, scissors, masking tape, paper and the like with some contact mics. Arriving at the venue, he discovered that Lambkin, independently, had come to the same conclusion. Those of us in attendance were than treated to the very fine spectacle of two gentlemen drawing, cutting, measuring and tracing, watching and listening to the results. A couple days later, Rowe took a train on the Hudson-Harlem line up to Poughkeepsie (this writer's home town and current whereabouts of Lambkin) to create the recording at hand, using much the same approach, though substantially augmented.

Were I to say that the results sound unlike anything you or I have likely heard, I'd doubtless be guilty of some hyperbole and would quickly be directed to a multitude of at least quasi-similar ventures. But. It's not just the sounds, for me, more that strong sense of what's going on, the calm deliberation at play, the concentration on the graphism without the overt care of the audio output. Like it or not--and I do, hugely--it's at least reasonably unique. Rowe has always said that, essentially, he's a painter and considers what he does to be a kind of painting. Well, that's never been more explicitly realized than here.

There are three tracks, with timings that strike me as odd enough (12:00, 15:15, 15:15) that I suspect some hidden agenda. You hear a recording Rowe made in an airport waiting area in which he'd spent some time on the way too the States (elsewhere, sounds from the train ride up the Hudson appear), including an announcement offering special services for military personnel and some distant pop songs. This melts into scissor cuts, adhesive tape pulls and, generally, the sort of elements that will make up much of the rest of the disc: two men at work making visual art. Track one, "Over C", contains a steady dull roar; not sure of the source, seems to be more present than would be the traffic flowing up Innis Avenue outside the Lambkin household, but maybe. Actually, it sounds more like an in flight recording of the muffled jet engines outside. It couches the quicker, sharper noises created by pens, pencils and paper which go about their business aurally heedless. It's so full, with so much air and space, the sliding between the particular (the art marks) and the general (the airport lobby, etc.) creates a vast "room", almost a funnel of those past experiences as represented by the field recordings, sluicing down into the drawing implements. On the title track, exterior sound, though present, is subdued, the scratches and bumps of the graphics front and center, along with some dripping or coursing faucet, chair squeaks, a brush in a glass (?) and such. It's more relaxed, more transparent; you begin to think of the set as a kind of sonata. Wonderful sounds: knife on knife, the scrape of sharp metal on dull paper, no talking but the odd grunt or cough. The last couple of minutes have a dynamic surge, a huge wooly sound as though something, some fabric, is being aggressively crumpled. No idea what it is, but I love hearing it, love the way it caps the anterior 13 minutes of relative calm, like a brief thunderstorm after a placid day. "Wet B" arrives in a torrent, abruptly broken off, the ensuing marking sounds crunchier, hastier, with long unscrolling of tape (a great sound, as anyone who does it regularly understands). Such a delicious soundscape! No climax here, thankfully, just the personal, almost domestic sounds of two fellows at work, some of the results appearing on the sleeve of the item in hand.

"Making A" is an exceptional work, not as much for the sounds themselves, gorgeous and evocative as they are, but for the state of mind(s) captured and for the evocation of a specific room wherein the activities occurring are both specific and redolent of the world at large. Extraordinary. 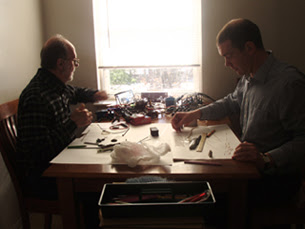