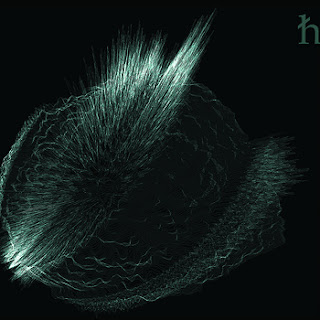 OK, first some housecleaning. JesterN is the name used by Alberto Novello, whose concept and composition this is. Much, if not all of the original sounds transfigured by Novello, came from Paolo Pascolo (flute and composition). I take it that Pascolo wrote or improvised the music on flute, Novello then running it through this or that program, modifying it pretty thoroughly. And then there are the visuals.

The release comes with two discs, one audio, one DVD. The audio on its own is reasonably enjoyable; the flute playing is of a modernist classical bent, clear and fluid, hinting at melody and rhythm without quite getting there. There are five pieces, often beginning with only the flute, then quickly adding crackles, zooms and other electronica, multiplying the flute sounds, layering them, engulfing everything in vortex-like swirls, withdrawing, leaving scant traces. At its smoothest, the music has tinges of Carl Stone, an echo or two of shakuhachi, but it's more often more disjunctive in the spirit of classic tape music (though, of course, here digitally generated. It's strong on its own, slithery here, plangent there, the electronics avoiding the cliches that sometimes infect this area.

But the work is fully realized only on the DVD, where the same pieces (edited from a live performance) are presented with interactive video accompaniment. Novello's program apparently uses sophisticated mathematical formulae involving growth and randomization and, as nearly as I can tell, it's the computer-generated sounds which directly trigger the visuals (though they themselves may largely derive from the flute). They tend to begin with a simple image then to undergo a series of transformations rendering them more irregular, more varicolored and, often, intriguingly organic, as can be seen in the cover image. Each of the five pieces is visually different, each going through a unique set of permutations, all enjoyable to one extent or another.

"hBar" is a strong and unusual effort, well worth investigating. 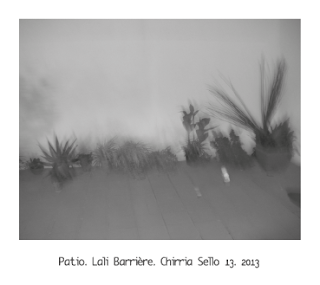 A very short (<12 minutes) but quite enjoyable essay in amplified objectness. A live performance, clearly embedded in its surroundings, Barcelona police sirens, birds and vehicle engines a consistent, underlying presence, Barrière's rumblings, strikes and burred percussiveness fitting in perfectly. Her work here is rough, no-nonsense without being strident or overly aggressive, staying for much of the piece within a rather narrow sonic range but exploring that very diligently, in textures, dynamics and compressed sound placement, before a nice coda that uses plucked metal of some kind, pinging like the rods inside a toy piano. Strong work--could have gone on much longer (sounds as though it did only the recording being cut off), though it's brevity is refreshing. 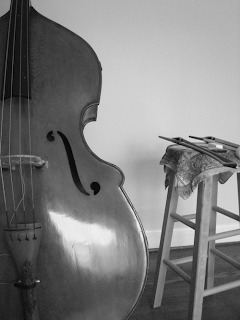 Daniel Barbiero - Not One Nor (zeromoon)

Two compositions for solo acoustic bass (Barbiero), each a healthy combination of restraint and extended techniques. "Not One Nor" provides the merest set of instructions, asking the performer to utilize two sound areas, "Bowing just above the bridge" and "Bowing the tailpiece". Other aspects such as order, number, duration, dynamics, preparations and amount of space is up to the instrumentalist, though re: the latter, leaving "ample space" is encouraged. The result is along the lines of what one might well anticipate but the strength of this recording comes through via Barbiero's sensitivity and choice of sounds. It's interesting in that, generally speaking, we've heard this palette before--what sounds haven't been generated by bowed strings at this point?--so it becomes a matter of relationships and placement, this texture against that, and Barbiero maintains one's attention throughout while quietly tickling the ear. A fine piece.

"Eighteen Events for Double Bass" sets that number of scripted activities against an equal number of "non-actions". Not sure what these are, exactly, possibly of a visual nature. Dealing with what's presented, we do hear a series of discreet events, some of which are a bit more "traditional" sounding than the prior work, with rich, dark arco, others far drier, with scratchy harmonics, and a wonderful almost whistling passage. It's consistent in approach with "Not One Nor" but also carves out a different structural area and is just as satisfying. Listeners into the Wandelweiser aesthetic will find much to enjoy here andI'm looking forward to more from Barbiero.