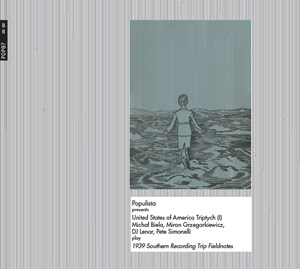 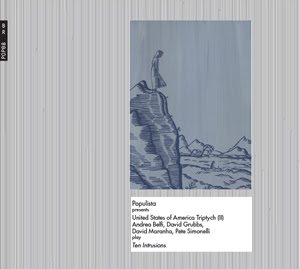 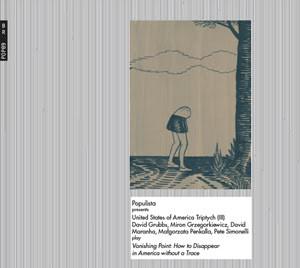 For the last couple of years, the Bôłt label, under the curation of Michael Libera, has released a number of very interesting, occasionally exceptional recordings which were essentially cover projects, albeit with highly unusual ideas of the kind of pieces to cover, often from the contemporary repertoire (notably, Ashley's "Purposeful Lady Slow Afternoon"). As enticing as this idea has been, Libera has pushed things a step further with this set, three discs issued under the title, "United States of America Triptych I-III", examining three unique aspects of Americana. One of them uses a specifically musical source, and an inspired ones but the others travel a bit further, um, afield. The total time of all three is less than 75 minutes, leading one to wonder why they weren't simply released as a single disc, but so it goes. Well, you do get three fine cover illustrations by Aleksandra Waliszewska, so I can't complain.

Volume I uses as its text, a selection of John and Ruby Lomax recordings from 1939, not "music" as such, but sounds and talk about the music being documented, presented in fragments and integrated into sounds provided by Pete Simonelli (voice), Miron Grzegorkiewicz (guitar), Michel Biela (bass guitar) and DJ Lenar (turntables). Simonelli, a poet and member of the band, The Enablers is the one constant presence throughout the triptych, possesses a healthy baritone capable of raging in a way that recalls, among others, Robert Kidney (very much so at times). The five tracks are presented without pause, the music having a vaguely blues orientation, most prominently displayed on "Parchman Prison, Mississippi", a low throb laying a good, grimy bed for Simonelli's rants against "red liquor". I'm guessing the sung texts are restatements of the original songs registered by Lomax though, not knowing the originals, I'm not sure. "Silver is silver and gold is gold/You don't mind if you lose your soul". A brief snippet of Mexican song, straight from the original recordings, is appended at the disc's conclusion. I'm hard pressed to say how much I enjoyed this realization; I did in parts, though I'm not sure of its lasting effect. The analogy to Kidney's work rang true through much of it and, to that extent, I think the music works--Simonelli's vocals may be an acquired taste for many but if you surrender to it, things more or less gel. It's a bumpy conglomeration, hitting its stride here, stumbling there. Worth a listen.

The second portion is titled "Ten Intrusions" and utilizes eight pieces from Harry Partch's "Eleven Intrusions", leaving aside the two studies and "Cloud Chamber Music" while adding two instrumental variations. The ensemble is Simonelli (sounding, it must be said, more than a little like the master, echoing his dark, sepulchral voice), David Grubbs (guitar), David Maranha (organ) and Andrea Belfi (percussion). It's pretty fantastic. While the group nods toward Partch and his justly intoned music, particularly in some of the guitar passages, it's by no means a slavish imitation, importing some bluesy elements (referencing the prior entry in the series) and discreet rhythmic modules. Simonelli is restrained, less so than Partch even, maintaining a cool, distanced outlook. On pieces like "Lover", he iterates lines, brooding on them like a barely contained John Giorno, Maranha's organ is marvelously subtle, atmospheric here, bubbling and gently propulsive there. Great source material, imaginatively, sensitively and, perhaps most important, gutsily handled. By all means, check this out.

As near as I can determine, Susanne Bürner's "Vanishing Point: How to Disappear in America without a Trace" is a compilation of anonymous, shall we say paranoid writings on the subject collected into a single volume, kind of a series of found documents elaborating on the thoughts of those whose skies are filled with black helicopters. Simonelli, Grubbs and Małgorzata Penkalla supply the vocals with Grubbs and Grzegorkiewicz returning on guitars and Maranha adding violin to his organ duties. The titles of the three tracks give you some idea of the nature of the text: "Destroy All Photographs", "Kill the Dog" and "Die with Dignity". The instructions bearing on these bits of advice are intense, shrill and maniacal and are delivered as such, especially by Simonelli who is again in something of Giorno mode, repeating lines with insane determination and vigor, singsonging lines like "kill the dog" and spit-snarling out others like "Criminals don't read, they're stupid! They're stupid!!". His subsidence into quasi-calm between explosions is as disquieting as the yells that inevitably follow. On the first two cuts, the accompanying music is almost subsidiary, just color. With "Die with Dignity", a shuddering figure underlies the words, like hesitant but determined steps toward self-annhilation, becoming fuzz-drenced as the piece bores on ahead. One could almost imagine Godspeed You! Black Emperor having done something like this, but this is better, stripped of any moody grandiosity. The paranoia becomes appropriately claustrophobic before the radio waves penetrating your fillings explode, ending your worries.

A finely realized set or works; can't wait to hear what Libera dreams up next.