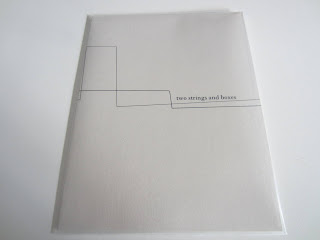 A composition by Thut for two zithers (excited by e-bows, if I'm not mistaken) and two cardboard boxes that's pretty damned wonderful. I've found some of Thut's work in the past to be a bot on the parched side, but hear the two basic elements, the soft hum from the strings and the even softer rubbing of the boxes, are beautifully integrated, just barely brushed in--faint smudges on a not quite pristine sheet (you can, I'm glad to report, hear the world of Solothurn, Switzerland beyond the walls, wisps of engines and conversation). One of many things that fascinates me about the Wandelwesier aesthetic is the way the finer examples of same manage to vary so much within such a quiet area, where your ear has a decent amount of work to do just distinguishing the sounds from your own ambience (if, indeed, you choose to do so--I don't, always) yet still acquiring a unique identity. "two strings and boxes" is akin in a number of ways to other things we've heard over the past decade yet it stands very much on its own and is a very thoughtful, beautiful work. Highly recommended.

The release includes a fine essay by Patrick Farmer that does a far better job than I do framing this music. 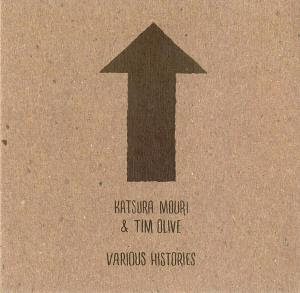 Sometimes you just crave some good old-fashioned eai....served up exceedingly well here. The opening low, fluttering growl is an immediate palate enticer, soon littered with crunchy clicks and skewed scrapes; we're on our way. Five tracks that, at there best, sound like where Voice Crack should have been by now had you taking their turn of the century work and plotted an upward quality graph. Mouri, who I don't think I've previously heard, is on turntables, Olive on pickups and metals, together create a brew both thick and spiky, with enough liquid continuity to flow easily but enough hard nodes to provide plenty of tooth. An implied, buried pulse often serves the music well as does a kind of transparency in the multitude of layers piled atop--there's a fine sharpness here and a sense of unwasted action. Also a welcome habit of saying what needs to be said then stopping. All too rare, nowadays. The pieces are well varied, covering ample ground quickly and with imagination, the closing track venturing into spacier territory, a stringent whine carving out a large room sparsely occupied by dull, echoing metals--very, very well done. 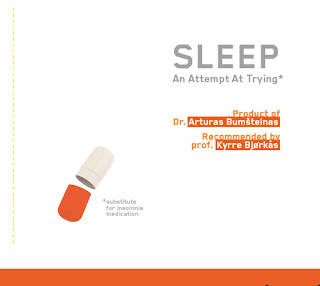 An odd one, this. Bumšteinas apparently suffers from insomnia and has decided to compose about it, taking as source material any number of "sleep aid" tapes he'd acquired at flea markets and the like over the years, electronically altering the music in various ways, adding lyrics (base on the instructions therein) by Bjørkås and scoring the affair, a nine-piece suite, for an improvising ensemble of voice (Marcus Gammel), reeds. flugelhorn, violin, viola, guitar, percussion and field recordings.

Indeed, the opening track, "Prelude/Interlude" immediately recalls the dreamier music of Robert Ashley and the whispered, buried words readily summon forth his "Automatic Writing". The pieces veer between this pole and a kind of Frissellian one (guaranteed soporific in my book), the gentle tones floating by, bearing soft pops and somnolent plucks, blurred and hazy. There's also something of David Sylvian (on Nembutal)in play. There's a sameness to the songs, though perhaps that's to expected in a way, an oneiric, soft-edged iteration, counting new music sheep. Bumšteinas seems to have succeeded in his modest aim, to lull the listener. I want to say that the results aren't too exciting but I guess that's the point.