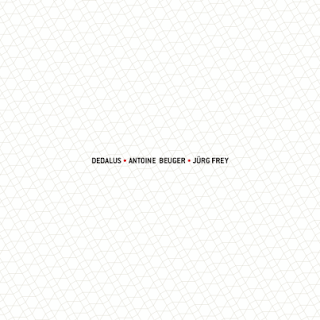 A couple of things to get out of the way. As more and more recordings surface documenting composers who first came to renown as part of the Edition Wandelweiser collective/label, using that term, "wandelweiser", has become an increasingly inexact way to refer to their music, given how much of it has spread out into areas that, for example, aren't necessarily spare, quiet, what-have-you. That said, the recording at hand, containing two pieces by Beuger and one by Frey, does in fact sit with reasonable comfort in that so-described zone. Second, like a number of recordings of this set of musicians and, more, like any number of live experiences, the ambience outside the specific room is clearly audible. Some people have problem with that. I not only don't but often (including here) find that it adds a wonderful--I'm tempted to say necessary--layer of meaning to the pieces, embedding this hyper-delicarte and sensitive music into the real world, on equal footing. (I recall seeing, a couple of years back, a performance at St. Mark's Church in the East Village, NYC, of some works with Barry Chabala, Ben Owen, Dom Lash (others?). While they were playing this intensely quiet music, one could see, through the large windows right behind them, a worker for the church carrying a large ladder which he proceeded to, with some noise, lean against the building, climb and do whatever it was he was doing. I loved that.

Ensemble Dedalus has as many as twelve members although, in recordings and performance, they adapt to the requirements for the occasion. Here, the present members are Didier Aschour (guitar), Cyprien Busolini (viola), Stéphane Garin (percussion, vibraphone) and Thierry Madiot (trombone), augmented by Beuger (flute) and Frey (clarinet).

Beuger's "Méditations poétiques sur quelque chose d'autre" presents the players with two pages, one containing ten melodies, the other fragments of text from Alain Badiou, Henri Bergson and Vladimir Jankélévitch. The musicians can play the melodies in any order and at any speed and may hum or read, in a soft voice, the texts. A few seconds before the first note, you hear the room and its presence remains throughout, car engine sounds mostly, blurred but every so often a horn or a pronounced revving motor. At first, the vibraphone seems slightly foregrounded, perhaps only because its tone separates itself more form the ambience than the wind instruments and the soft voices. The occasional sibilances of the latter bring them to one's attention as they gently eddy amongst the played notes. There'n an ever so slight tinge of Ashley here, like a quieter variation on his "Automatic Writing" as the words are all but indecipherable. The work indeed has a dreamlike feel, very ethereal, in which case the exterior sounds provide a perfect offset, not too grimy, still somewhat distant, but making their existence known. As the work progresses, the flute and clarinet assume greater prominence, producing some really exquisite harmonies and subdued dissonances. It all flows so naturally, slow and meandering, suffusing the space second by second like advancing sunlight.

As the title implies, Frey's "Canones Incerti" consists of two sets of melodic lines per musician which, if I understand correctly, are played in order, a then b, but the duration, entry time (after the beginning) and number of iterations are up to the player, the piece ending when everyone has stopped. And what eventuates certainly carries that quality of a canon, of overlapping directional lines (echoed by the sonic vectors of the passing automobiles, which sometimes, for me, take on the aspect of breaking waves). Perhaps it's the vibes, but something about the work has a dreamy, gamelan-like quality. If I have a quibble it's that a work with such a timeless feeling to it ends a touch abruptly-but a minor carp.

One excellent consequence of the increased recorded output by the Wandelweiser cadre has been multiple performances of the same piece. Beuger's "Lieux de passage" (a term sometimes translated as "corridors" but which I like to read as "way stations") was given a wonderful reading on the Another Timbre box set and likewise here. Here, the idea is essentially a clarinet solo (given ten lines, able to begin where the player wants, stopping wherever desired) with the other musicians playing a note from the line form time to time. By virtue of its structure, this composition has a less systematic sound than the other two, the undulating, plaintive, even wistful lines of the clarinet taking on the character of an elongated, non-pyrotechnic cadenza, slowly unfurling, becoming wind borne, nudged now and then by puffs from the accompanying musicians. The image of spiraling cigarette smoke dissipating into a room might be too easy but also the feel here is less smoky than liquid. If you can covert that image into water vapor, maybe that's getting close. Gorgeous, thoughtful and extraordinary music, however one attempts to analogize it.

A great recording, no doubt.