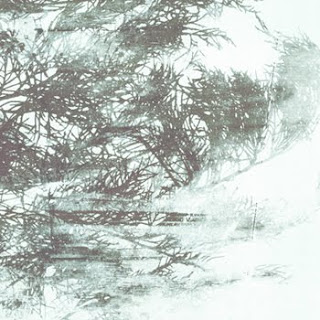 Diatribes, btw, are l'Incise (objects, laptop) and Cyril Bondi (bass drum, objects cymbal), here joined by Moimême (prepared guitar), Chagas (trombone), Rodrigues (viola) and Torres (alto saxophone). The sonic palette, as you might expect, is rich and attractive, though I found the improvisations more or less routine. Mostly dwelling in the quiet, rustling zone with the odd, moderate eruption, pleasant enough but not consistently gripping. The horns do an admirable job of seamless blending, the strings scrape and saw in solid fashion, the objects do their object-y thing and...well, it's fine, I don't mean to be that critical, it just doesn't stand out so much from many other recordings or concerts in the same vein. It's interesting that certain events here, for example Moimême's introduction of deeply plucked guitar notes in the fourth track, a more "traditional" sound, serve to greatly enliven things, the path having perhaps come around to a point of reappraisal of previously abandoned approaches. 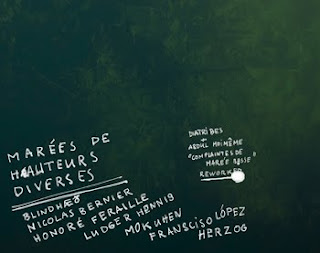 In which music by Diatribes and Moimême ("Complaintes de Marée Basse") are remixed by Blindhæð, Nicolas Bernier, Honoré Feraille, Ludger Hennig, Mukuhen, Francisco Lopez and Herzog, only one of which, if I'm not mistaken (Lopez), I've previously heard.

I have no idea what the original source sounded like, so I can only describe what's here. Blindhæð's piece is murky and rumbling, redolent with squeaks and clanks; they (he/she, no idea) have recorded for Mystery Sea and that label's aesthetic can be heard here. Nicolas Bernier constructs a pleasingly wild take that reminds me a little of the classic Pierre Henry "Psyche Rock" track", not nearly as melodious but with a similar full sound, including rattling drums--nice. A hollow spaciness comes to the fore with Feraille's piece, containing a nice surge and echoing metallic scrapes, segueing into Ludger Hennig's evocative blend of tapes, hiss and clatter, really a strong work that feels entirely natural, just floats through the atmosphere, internally active and self-contained; curious to hear more from him (he's also on the disc reviewed below). Mukuhen (don't ask me) offer(s) a track that begins gently enough before careening into the realm of sheared metal, sprung coils and charged pops; Discomfiting, in a good way. Lopez (unusual in my experience, which is likely only 2% or so of his recorded oeuvre) keeps things quiet and burbling, steady-state and comfortable. Herzog (I'm guessing not Werner or Bellow's character) closes out the affair with a juicy conflation of lush, deep organ-pedal-like tones and mid-range crackly hums. A nice conclusion to an intriguing set; a couple of very good pieces, nothing unlistenable. 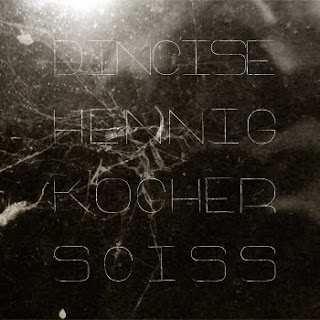 What leaps out from this session is the solidity of the music--I daresay I would have suspected a single individual behind this, not a quartet. Given that it's essentially, three computers and an accordion, I suppose, given sufficient sensitivity on the part of Kocher, that this shouldn't be so very hard to achieve, but all I can say is that it certainly sounds like a singularly directed improvisation, and a good one. It sounds very think, always with several plies at hand, generally one or two occupying the lower depths, often with a rubbery feel, rubbed rubber if you will, usually offset by crisp, higher tones, crackling and staticking along, but taking different pathways on each of the four tracks. I'm guessing that it's often Kocher's accordion that glues things together, not that it ever sounds like one; there are several wonderful low squeaks at the very end where it sounds like he's twisting the fabric of the instrument, a beautiful accent. A very strong recording, standing out from many in this area.