Few things are more heartwarming than coming home to find an LP-sized package or two waiting for me. So, three new pieces of vinyl: 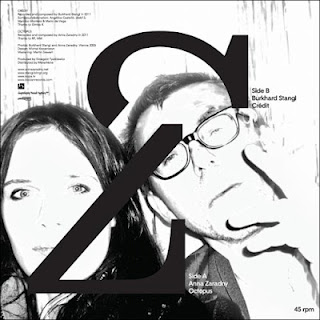 A shared LP with work from 2011. Zaradny's "OctΦpus" is a powerful, throbbing work, electronic, initiated with staggered rhythms that almost replicate an LP skip, but a shade too slow. It's dark and brooding, multiple layers washing over one another, with small beeps and crackles carried along on the pulse. When shifts occur, they're clear--it's not really a steady state work--but they feel of a piece with the music as a whole. It draws a little bit from trance perhaps and really doesn't have much in common with eai-based improv (curious how much, if any was improvised, actually). The super rich hums provide giddy enjoyment through out, tangible enough to take a bite out of. A very enjoyable track, quite strong.

Stangl's "Crédit" begins almost in quasi-similar fashion as Zaradny's, atmospheric with skipping sounds but a minute or so in, his glorious guitar sound entire and we're in Stangl territory. It's a rather pastoral work, guitar chords shining through a gauze, taking a gently meandering path through only mildly harsh environs. Just when things are getting a bit too gorgeous, the music veers drastically and wonderfully off-track into grinds and chaotic clatters, before oxbowing around to some serene and very lovely piano to conclude matters. A satisfying and extremely thoughtful journey, well worth taking. 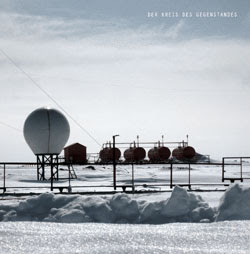 I imagine there's a more idiomatic translation than "the circle of the article", curious what it is. A curious recording, as well. The four tracks, though similarly titled (DKDG I - IV) are credited one each to Dörner and Johansson, two to Dafeldecker, yet they sound remarkably alike. They sound pretty much improvised for the most part 9the fourth shows signs of intentional segmentation, though), which I guess is to their credit if that's not the case, but they also sound not so different from much recent music by these three musicians in other combinations, that is, attempting to straddle the eai/efi/compositional divide with results that fall a bit short of high water marks in any of the three. It's not bad, but the brass flatulence, rubbed wood and skins seem deployed almost desultorily, without a great deal of real drive behind them. There are strong moments, as in the interplay on the third track with delightful bass pizzicato meshes with percussive scrapes and taps and subtle whooshes of metallic breath; would that there was more at this level. The final track also reaches pretty solid ground via swathes of rubbings and breath, once again embellished by deep thwacks from Dafeldecker. These are satisfying enough, I suppose, though I can't help thinking more could have been achieved. It's frustrating in a way similar to the latter Polwechsels. You just can't help but think that there's more there, somewhere, untapped. 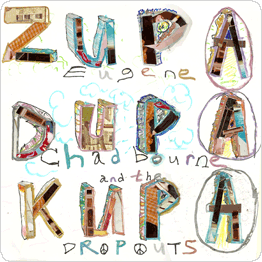 Well, I admit the excitement aroused upon seeing those LP-sized packages was tempered somewhat when I espied that one of the enclosed slabs of vinyl was more Chadbourne product but...I have to say, this one is far better--contains far more good moments, that is--than I could have reasonably expected. As I imagine I've written before, my patience wore thin back in the mid 80s, at least, the enjoyment I derived from his picking and occasional fine cover (especially those Phil Ochs pieces) being swamped by the aggravation engendered by his simplistic politics and sub-adolescent humor.

To be sure, those negatives are well-represented here but there's enough touching work ("Bird Song", for example) and pure rocking out to compensate. I'm not certain who exactly makes up the Dropouts or whether the names on the sleeve bear any relation to reality, but Chadbourne does a good bit of solo work, otherwise largely assisted by one Pink Bob. Yes, he goes after the Vatican, the White House, etc. Yawn. Worse, he goes after dentists. Reggae-style. You know, those sadists who make your teeth hurt and charge you for it. Now Chadbourne's always had a sizable dollop of cranky old man in him, but jeez, he's entering "Get off my lawn!" territory here.

Enough of the obligatory nonsense. If you dispense with the humdrum vocals, "Hendrix Buried in Tacoma" if a solid groover; if not up to it's homagee's status, certainly a great deal of fun with ripping, abstract guitar work and it's followed by the fine and aggressive "Sword + Shield", leaping into Minutemen territory. The surge hinted at in these pieces really comes to full flower on "Forgiven", an organ-driven, propulsive work which is--I'll go out on a limb--the single best thing I've ever heard from the good doctor (not that I'm anywhere near cognizant of the vast majority of his output). A seriously strong hunk of rock.

A bumpy road but overall, really, not bad at all.