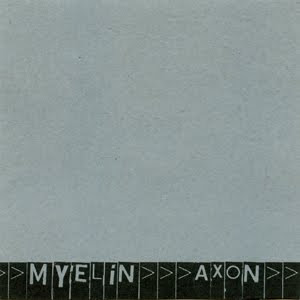 Myelin, of course, is the material that acts as a sheath around an axon. Here, it's Birgit Uhler (trumpet, radio, mutes, speaker, objects) and Heddy Boubaker (alto saxophone, objects), emitting seven "impulses", seemingly targeting those areas of the brain that delight in sputter and growl. It's interesting--I take it that the pair intentionally confined themselves to this spectrum (as well, all seven pieces are between about six and eight minute in length). It's as though they said, "Let's examine seven axonic firings, take these more or less alike things, smear them on a microscope slide and sort out the differences." This idea, possibly entirely imaginary on my part, jibes with my sensibilities, and listening to it thusly, renders the music fascinating in an unusual way. Of course, when one does bend an attentive ear, one realizes there's actually a decently wide range in play. Things are active, maybe a bit ore so than some listeners would want; it's boisterous and raucous throughout much of the proceedings, both instruments rattling about, burbling (subaqueous on occasion), hissing--extended techniques we've encountered before, to be sure, but vigorously played with good concentration. Good, rough music, straight from the medulla.

A cassette release which I heard on CDR, Dziewanski continues his interesting exploration into drones. As readers may be aware, a lot of dronage finds its way to my mailbox and, admittedly, there's a tendency for it to blend together in my memory; perhaps that comes with the territory and/or to not having the time to sit with the works long enough to really establish some differentiation in my head. It can also be something of a task to attempt to describe the pieces in ways that don't overly iterate what I've said before about others. Just a general caveat that I hope Adrian doesn't mind me appending here.

Three pieces here, all of them quite attractive, all bearing a definite electronic air, the first ("Pointed Logic") reminding me at times of Carl Stone circa "Mom's" and, inevitably I suppose, mid 70s Eno, as fine a pair of referents as one could want though I imagine current day practitioners aren't so crazy about feeling their weight. But the very tonal layers of washes, the throbs, the piquant upward thrusts do revive memories of those years and, in my mind, don't detract from the music's loveliness. The brief "At the Crest of the Sinking Sands" introduces some welcome roughage in the form of some bumpy churning beneath and slightly less melodious plies of electronica. Side B of the cassette, "Two to Every Plot", continues to add to the mix with rainfall, delicate taps on glass or metal and other elements. Dziewanski finds a nice balance here making this the most satisfying piece for me, melding the rich hums with just enough stray detritus for it to feel a part of the real world, not a pipe dream.

Fans of the area should certainly check this out.