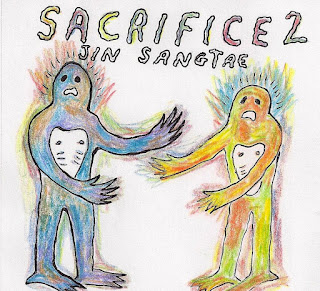 Welcome to Difficult Listening Hour...or 24 minutes, at least, on this tough and exceptional 3" disc. The instruments of choice for Jin this time out are car horns. I'm not entirely sure if these are "pure" car horns or electronically manipulated somehow, but I feel safe in saying extended techniques, so to speak, are employed. Which is to say that they don't always sound like what one normally associates with the species. Which is likely beside the point.

More to the point, I think, is the piece's gnarly, seemingly random structure in terms of both dynamics and textural/timbral range. One seeks to impose a pattern--slow and quiet at first, rising to some louder peak, etc., and one can almost do this but it's a frustrating and worthless endeavor. Jin seems to go out of his way to make the sounds themselves as problematic as possible; once one is accommodated to the low, unhornlike growls that commence the work, they shift into harsh squeals, then grinding, shuddering metal and eventually some extremely loud, piercing blasts that sound more like the most aggravating car alarm in the world than a tootling horn. The sequence has a flow of a certain kind but feels erratic. There's nothing natural about it, which given the sources, is appropriate.

It's a very unpleasant, rather disturbing and probably important piece of music. It shakes one out of complacency and comfort and leaves one with much on which to chew and ponder. It's uncomfortable. Check it out. 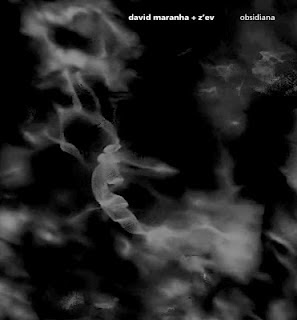 I may have mentioned it before but...I first encountered Z'ev in 1982 (iirc) at the premiere of Glenn Branca's Symphony #2 at St. Mark's Church (the performance eventually becoming the recording). Branca at the time still used (wish he'd never given them up!) the "guitars" made from 2x4's, layered in banks in front of each musician, played with small metal rods. Among other things, this lent the wonderful effect of player's making minimal movement but generating enormous volumes of complex sound. They were arrayed in a semicircle surrounding a huge bass drum in the center of the room, positioned almost horizontally, at a slight tilt. As the concert was about to begin, in strode an impressive looking figure, black pants, bare-chested save for thick leather straps that crisscrossed his torso, bearing a pair of thick wooden clubs. He gave the drum a massive whack that reverberated in both room and skull, then another, and another, slowly, ritualistically...and the piece began. He'd later, via chains attached to gauntlets, swing around basins, sheets of metal and other detritus in 20-foot arcs, creating an incredible welter of noise. It was kinda awesome.

"Obsidiana" (great title) is rather curious. I keep thinking of having taking the closing minute or two of a cool prog rock jam, say an early Soft Machine piece, and simply extending it to 35 minutes or so, delving into its details, spreading it out without losing any of the delicious thickness. In that sense, this is very much a single idea work and I guess there are limits to it's lasting value but it's a good deal of fun going along for the ride. Z'ev doles out a rippling pounding on a bass drum--perhaps the very same one!--(also steel discs and, notably, maracas, while Maranha summons fuzz-drenched organ tones at the beginning, very guitarish sounding, later allowing the "true" Hammond tones which have been lurking all along, to emerge. It churns and churns, staying in the zone, very pleasurable if, ultimately, of dubious nutritional value. But, hell, fun.

hi brian,
not sure if you review web offerings on your blog, but regardless i think you'd be interested in some of the things at my new project at eulachon.us.
thanks.
gust burns
(sorry for sending this message as a comment - couldn't figure out how else to contact you - feel free not to approve the communet.......)

I can't locate an e-mail address for you either, so hope you see this (you can get back to me at brian.olewnick@gmail.com)

I'm still neolithic enough that my computer isn't hooked up to my speakers and I don't burn discs, so anything on-line I can only listen to over the pc speakers, not the way I'd want to form an opinion of anything. If you could send a burn my way, I'd love to hear it.