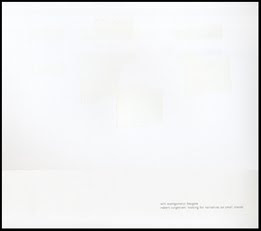 Montgomery's piece, a fine work, evinces how wide the range of "field recordings" can be. Here, using input from contact mics, a vlf receiver and a telephone pick-up coil, he evokes nothing of what one's ears would hear (though perhaps subliminally) instead presenting an array of harsh crackles, super-low hums, metallic crinkles and more. It seems as though there are rarely if ever more than two or three sources in action at once, instead the sounds arrayed out over the course of 20 minutes, parts overlapping but more felt as a sequence, calm in arrangement but often disturbing and agitative in essence. It has a fascinating slow kind of rhythm to it, very purposeful and strong. Excellent piece.

Curgenven utilizes a broader array of means (a "transparence" duplate, guitar feedback, binaural mics, industrial fans and field recordings from various sites worldwide) but produces a much more homogenous work, though equally enjoyable. The baseline hum, rich in and of itself, is littered with scratches (always odd, on an LP, when LP scratches are used...), faint crowd sounds (I think?), traffic and more. It streams along, always engaging, and surges toward the end in a rather brutal and surprising climax, only to return after a few moments, withdrawn and somber. 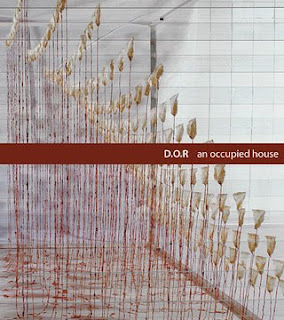 Jamie Drouin (analogue synth, radio), Lance Austin Olsen (copper plate, objects, floor guitar) and Matthieu Ruhlmann (objects). More solid, enveloping music from our friends up yonder. Hard to quantify though, or maybe I'm just not up to it today. The pieces combine certain steady-state properties with elaboration atop, which is only to say that there are often "pedal points" in play, layers of sound, with intermittent commentary. Not a revolutionary concept but exercised with fine judgment here, not overly reticent either. The music has its share of mini-eruptions along the way, conveying the feeling of having been welling beneath all along, which for me is a sign of a well-understood, well-realized form. That sense of not-quite-surprise, of an occurrence that is at once unexpected but, in retrospect, quite logical pops up again and again here. The vocabulary is a more or less known thing, the sentences are plain enough but the content is unique and lovely. Think Murakami short stories. Recommended. 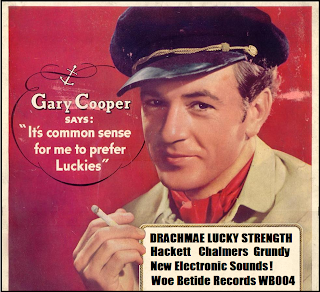 Being the trio of Martin Hackett (synths), Stuart Chalmers (electronics) and David Grundy (laptop)--there's a piano or facsimile of same in there as well--and consisting of irregular electronic soundscapes ranging from the sguiggly (overly so, to my taste) to the bleakly spacious, a more effective gambit. The trio has an almost defiant need to showcase the kind of loopy electronics stemming from analog days, specifically the 60s of Babbitt et. al., a sound, admittedly, that tends to grate on these ears, though that may be simply a function of age and particular experience. The work is also active in a general sense that owes more to efi in its more electric variants (Hugh Davies, etc.) than eai which, these days for this listener, is a tough act to pull off, especially when the sounds carry some emotive weight. For that to work, things have to be operating at a high enough level to obviate any kind of sentimentality (in the general sense) and it causes some trouble here. I take it these fellows understand all this and are making the attempts despite the potential pitfalls (or perhaps they don't see them as pitfalls at all) and in the interstices there's some exciting music here, just not consistently enough for me.