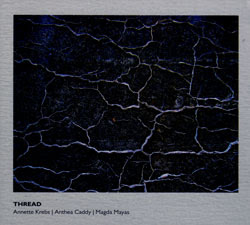 Two cuts, one studio, one live, recorded in 2008 and 2009 respectively, by this very interesting trio: Krebs (prepared guitar, objects, tapes, mixing desk), Caddy (cello) and Mayas (piano). While I'm far more familiar with the work of Krebs than that of the others (though I've seen both perform), it's safe to say that the music fall into an area in which fans of the former will feel at home. The 10-minute first track, "Sands" contains all but unpredictable variations in almost every conceivable musical aspect--volume, density, timbres, much else. Quite rich, very compact, Caddy's deep arco gluing together the more far flung escapades of the others.

The 26 minutes of track two, "Shore", is far more expansive, event-packed but airier and spacious. The trio functions as just that, seamless, each element fitting--Krebs' taped snatches of voice, Caddy's scrapes and plucks, Mayas' inside piano work. There's a tidal feel, a soft ebb and flow that entirely satisfying. It's simply one very strong improv session, solid and gracefully awkward. 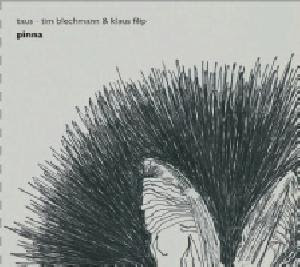 Pinna is the outer part of the ear, by the way; fine title. And a fine recording. But fine in a way that always causes me to be at pains to quantify. Two laptops, a live 50+ minute performance of the general type that I think of as "steady state" rather than drone, though don't ask me to differentiate. It does take the shape of a crescendo though it's long enough in coming that the dramatic effect is felt before consciously perceived. Label producer Reynall had queried me on these pages a short while back as to what was meant by my (too frequent!) use of the term "grain" when describing some music or, conversely, feeling a piece was excessively smooth. Here's a case in point, though it might well be entirely subjective--although on the one hand there's an evenness here, a "smooth" shifting of planes, a continuity of action, I sense grain everywhere. It may be fine-grained (!) to the point of sublimation but it's there.

It idles beguilingly for a good bit at the start, several layers biding their time, gathering energy; it's very much like standing near an extremely subtle motor, gradually realizing how much stuff is happening, how well integrated it is to fool you into thinking, for a moment, that it's one thing. It gestates for a good while, circling, softly rumbling, high, sine-like tones coasting atop, splitting apart, isolated bangs heard in the distance. Those keening tones almost take on a melodic aspect at points, quite beautiful. Second gear doesn't kick in until some 4/5 pf the way through but it's timing feels just right. Gentle, sonar-like blips manifest, the whole thickens and grows wooly. The crest is mild, not overblown, the subsidence relatively quick.

In sum, just a very, very satisfying experience and a seriously enjoyable hunk of music.

Thanks for these, Brian.
On 'Pinna' I like your distinction between "steady state" and drone, though I too would be hard-pressed to define the difference, beyond the purely subjective / contingent distinction that I would expect to like the former, but not the latter - a bit like determining whether a recording has 'grain', in fact!
Glad you liked them anyway, best wishes.