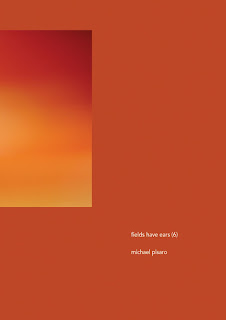 I'm not at all sure I grasp this piece in its entirety. Rather, I'm sure I don't. Its basis is explained adequately in the notes included here and I like and appreciate what I read but the listening experience, for me (as I write, I'm in the second day of listening to nothing else, about eight cycles in [eleven, by review's end]) diffuses quickly enough to make the work sit uneasily, unwieldy, in my head. Which I imagine is a good thing.

Part of it is likely my enormous love for the more (seemingly) stringent work of Pisaro, the music I discovered some four years back where often a singular idea was allowed to develop over a substantial period of time, revealing worlds of sound and ideas hidden therein. In the last couple of years, as far as recorded output, he has become more expansive, freer with colors, denser in layering. Often my initial reaction is cautious though I tend to be won over in the end as the logic manages, ultimately, to penetrate my thick skull. On "fields have ears (6)", he's pushed things further, describing the result as having moved from the orderly garden of the initial idea of the series to something "resembling a rather unruly city park" and, for this listener, it offers a lot to grapple with.

I should mention that, on a purely sonic level, the disc is eminently listenable and enjoyably so. The washes of sound lap against and over one another smoothly, the various guitar parts (sometimes reminding me of Loren Connors, of all things), richly emerging from the field recordings and sine tones, the whole possessing a gentle surging aspect over its 56 minute duration. Pisaro has layered in recordings from prior performances of "fields have ears" compositions (all of them?) and more, much more besides; I'm guessing there are enough plies involved that it's almost impossible to differentiate them and that the piece is in reality denser than a human ear can hear. My problem, such as it is, is that I think this tends to blur the whole a bit, sacrificing the kind of pronounced acuity one hears in his sparer works. Of course, this may be a goal. His city park is different from an isolated stretch of California mountain, silvered with sine waves. Less Barnett Newman, more Pollock. One might be better served accepting the entire, wooly ball rather than seeking to aurally crystallize the individual elements, much as one perceives those two painters differently. And it took me much longer to really get Pollock (an ongoing process, actually) than Newman.

So, if I'm on a fence here, I'm pretty sure it's a fence of my own making, probably having to do with (however hard I try not to) attempting to shoehorn this into my prior conceptions of what I've enjoyed before from Pisaro. At the end of the day, it's still a very good piece of music, but likely even better than I'm able to hear at the moment.

fwiw, the old layout was much better. this new one is murder on the eyes.