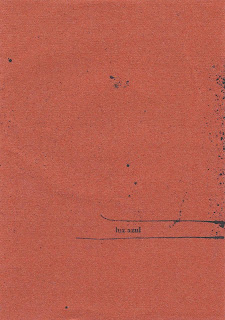 Ah, my favorite palindromic band! Ruth Barberán (trumpet, objects) and Alfredo Costa Monteiro (accordion, objects) return with a pre-dawn recording realized in an olive grove alongside a working train stations (not an inert one). The atmosphere, from crickets to trains, pervades the proceedings, Barberán using mostly soft but raspy technique (scraping the horn's metal, I imagine, and placing thin plates at the bell, etc.) while Costa Monteiro largely allows a fairly natural accordion sound to emerge, rather plaintively when one considers the environments, vaguely echoing distant locomotive whistles. The trumpet picks this up, injecting burred, industrial tones, mating calls to the passing engines. The tones tend toward the sustained, echoing both rumble and the delicate insect life, but the duo, manages to attain a wonderful equilibrium here, neither too deferential or overweening, but fitting in as though a regular nocturnal occurrence at this location. The sense of relaxation is amazing.

There's something very magical about this performance. It's so beguiling to imagine sitting on some bench at the station, perhaps around the corner from this pair, hearing their sounds emerge and blend into the surroundings, perhaps never looking to see what had happened. Very, very lovely. (and a sandpaper cover never hurts...)