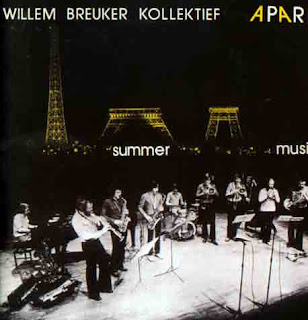 "Summer Music", recorded in February 1978 and originally issued on the French Marge label, is certainly one of my top 5 Breukers. It balances between the rawness of the mid 70's sessions and the seductive perfection of execution found in the two excellent albums from the next couple of years, "In Holland" and "Driebergen-Zeist". From the wonderful, herky-jerky, quasi-Arabic romp "Parabasis", to the lovely Anabelle (as romantic a theme as you'll find in Breuker's oeuvre) to the boiling "Condizione Niente", a rare (only?) piece by Raaymakers to the hyper-lush and heartfelt-while-bathing-in-schmaltz and hilarious rendition of "Let's Fall in Love". That's Side One. The second side features the title piece which points the way toward some of his more monumental (and, to be sure, increasingly tiresome) work of the following decade though the slogging ponderousness has yet to set in. Really fine recording, this one. I believe it's available on disc. 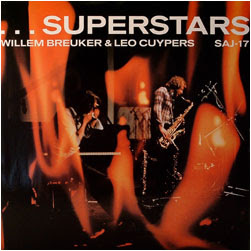 The following month, Breuker and Cuypers recorded the duo album, "...Superstars" for SAJ, live at the FMP festival workshop. Listening now, I'm struck by how much more beautiful the pianist's contributions are than Breuker's. Cuypers kind of comes out of Jarrett to an extent, but more liquid and with an almost unfailing sense of melodicism. More's the pity he was so inactive for such a long time. This disc is much more raw than WBK material from around the same time and sounds rather refreshing now. Features an amusing version of "There's No Business" and concludes with a fine tribute to Rahsaan Roland Kirk. 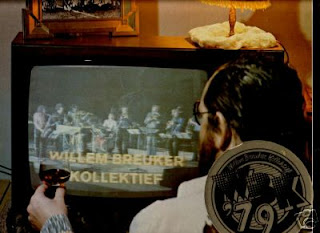 WBK '79 was a big favorite of mine when it appeared though on more recent listens it strikes me as a bit cold, again presaging subsequent work. Nice enough tunes including, I think, the first examples of Breuker covering other composers, in this case Weill's "Song of Mandalay" and Grieg's "Ases Death". The concluding long piece by Willem van Manen, "Big Busy Band", is rather flat, similar to his music for his own Contraband, which I've never enjoyed. 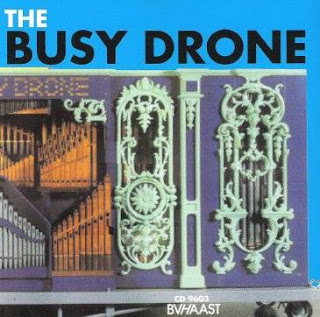 I file "The Busy Drone" under Breuker for no particular reason except that he has two pieces here. It's a fairly odd recording: works written for a portable, mechanical organ by Breuker, Misha Mengelberg, Louis Andriessen, Cor Kee, Gilius van Bergeijk, Nico Schuyt and Gus Janssen. The original vinyl release came "plus extra sincle [sic] record!", that is with a 45rpm disc which contains some classical pieces (CPE Bach, Haydn, Leopold Mozart, Prokofiev, de Severac and others). Can't say I've ever found the album to be more than a curiosity. Still don't ! Maybe the instrumental possibilities of the contraption are limited--though why that should be, I've no idea--but the music here just isn't that rewarding.
Posted by Brian Olewnick at 12/30/2007 09:43:00 AM