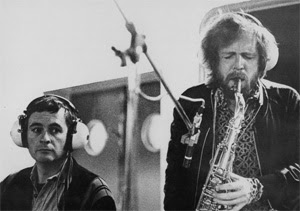 The first Breuker in the vinyl shelf spans music from 1967-1978, the oddly titled, "Music for His Films" the "his" being Johan van der Keuken who, if the movies sound-tracked here are any indication, specialized in what might be called politically oriented surrealist documentaries. No real cover image available though the above photo is essentially it. imdb lists a couple of the films featured here, "De Platte Jungle" (Flat Jungle) and "De Nieuwe Ijstijd" (The New Ice Age). Hmmm, I see there are two volumes of his complete works available from Netflix (he died in 2001); might have to check them out. For some reason, the music is arranged in reverse chronological order, 1978's Flat Jungle coming first, performed by the Kollektief, pieces that were also recorded on "WBK '79". Kollektief members are also on hand for two selections from "The Palestinians", both very effective, a mournful duo with Breuker and Bob Driessen on altos and a march with those two plus Louis Andriessen on piano and Verdurmen on drums from 1975. The New Ice Age (1974) has more good quasi-Kollektief work (again with Andriessen). An intriguing track from "Beauty" (1970) mixes some gorgeous writing for string orchestra with gull and beach sound. The great John Tchicai makes a powerful appearance on two cuts from "Velocity: 40-70" (1970), a beautiful minute-long, solo alto piece then a duo with Breuker (on bass clarinet) which sandwich a agitated, brooding number for viola, bass and bass clarinet; a real nice trio of compositions. The album concludes with a zany, off-kilter drinking song/march from "A Film for Lucebert" (1967), performed by a quartet of Breuker, Gilius van Bergeyk (oboe), Viktor Kaihatu (bass) and the redoubtable Han Bennink on drums. Actually recorded 41 years ago today as I type this. A good record with a lot of life and variety. 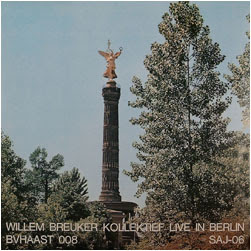 "Live in Berlin", jointly released by BVHaast and SAJ, is from November of '75 and finds the Kollektief not quite in the sharp form it would soon assume. The recording quality is a bit muffled as well, maybe adding to this impression. They run through several pieces from La Plagiata--a bit rocky and not so exciting. At this point, flutist Ronald Snijders was still with the band (he was out by the time they played Environ). The highlight might be the last number, a stirring rendition, complete with vocals, of...."Our Day Will Come".

The European Scene album which I referenced a couple days ago still kicks butt. It's a very well paced set of the type that would become the standard for WBK over the next few years: set themes with non-accompanied solos, laced with sly humor. A word about a few of the musicians....

I often wondered, and still do, why some of these guys almost only appear on record with Breuker. Among jazz musicians of the 70s and 80s, these are among the absolute strongest I've heard on their respective instruments: Boy Raaymakers (trumpet), Maarten van Norden (tenor), Arjen Gorter (bass), Rob Verdurmen (drums). Gorter played around a bit, though not nearly as much as you'd expect from such a monster talent. van Norden was injured in the same van crash that killed Harry Miller--I believe he had some serious harm done to his jaw that prevented him from playing for a number of years--but he's apparently been back with WBK for a while now (I gave up on them around 2000, more on that later). Raaymakers is just killer--I know he's a bit older and came up with various bop bands but, aside from an album with van Norden from around '77, I've never heard him outside of WBK. And Verdurmen, jeez he's just insane but again, does he ever play outside of WBK.

I get the impression this band does extremely well, it's tour schedule remains impressive and I think it receives a goodly amount of government funding so maybe it's simply a matter of it being a good gig. I wonder if Breuker is extremely protective of his talent, maybe restricting their outside activities? (Not an accusation, just a thought).

A note about Cuypers. For my bucks, the band lost a huge amount when he left, apparently for alcohol-related issues. As masterful a technician as Henk de Jonge is, to my ears he lacks the sheer musicality that Cuypers brought in. He does have a few discs under his own name that I'll get to eventually, including the very fine "Heavy Days Are Here Again" with Breuker, Gorter & Bennink.

Came across the photo of Cuypers at this blog 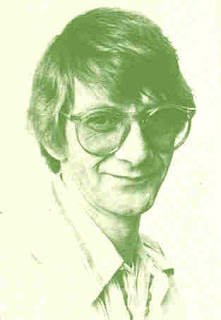 OK, one more for this post, "Willem Breuker Kollektief on Tour", recorded in Rouen, France 3/3/77. Not a very good record, imho, rather scattershot, though "Potsdamer Stomp", with its hoe-down character, is a lot of fun and I clearly recall the swaying horn section routine that accompanied it in performance. Most noteworthy for being, as far as I know, the first in a never ending series of albums featuring a photo of the band standing stiffly around with their instruments. No hanging penises to be discerned. 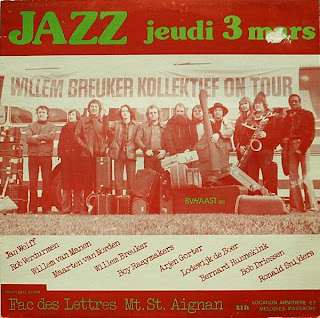