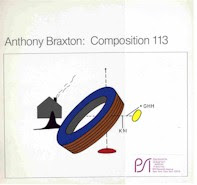 "Hey!", I can hear the choruses of readers screaming, "What happened to all the Braxton posts?!?". Well, maybe two or three of you. Just haven't had time to go back into the vinyl lately, too much new stuff around to sift through.

But without re-listening, I'd been thinking about the post-Arista, pre-Dresser/Crispell/Hemingway quartet work. I get the feeling Braxton was, in some ways, treading water for a few years, re-examining things he developed in the preceding 10-15 years but not really coming up with anything conceptually new and solid until the collage music phase that pretty much began with that quartet around 1984-85.

There's much less a sense of excitement on some of the recordings in between, though they're by no means bad. Ray Anderson, John Lindberg and Thurman Barker are all fine musicians but though I'd generally take Barker over Altschul, Anderson/Lindberg just isn't in the same creative league as Lewis/Holland. They play the charts well, they improvise OK but the sizzle's not really there at least on the Moers release from '78.

His non-jazz quartet music from this period tends to be more intriguing. One release that didn't grab me as much back then is making a better impression today: one of the first of his albums on Sound Aspects (SAS009), 8KN-(B-12)--R10 with the Robert Schumann String Quartet. Two versions of that piece, one with Braxton joining the ensemble. Falls into what I think of as "Romantic post-serialism", that is, all manner of modernist techniques but underlaid by some (nicely) old-fashioned dramatic concerns. Six brief solo tracks are included here, also pretty good.

The first encounter with Max Roach, "Birth and Rebirth" (Black Saint, BSR 0024) from September '78 was a fairly momentous event back then. I was never entirely taken with it as much as I love Roach's work (and who, with Blackwell, has always been my favorite jazz drummer). In fact, I find now as then that I tend to listen to Roach and tune out Braxton. 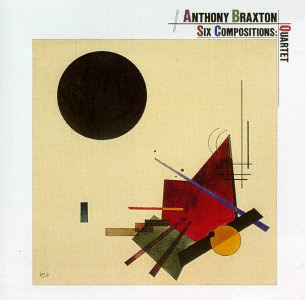 Speaking of Mr. Blackwell, he shows up on "Six Compositions: Quartet", a 1981 recording issued on Antilles of all places, the group filled out by Anthony Davis and Mark Helias. It's fine though again, not as classic as one might hope. Blackwell fits in ok, Davis brings an interesting sensibility to the music--I wish they did more work together.

Probably my favorite from this interim period is the most idiosyncratic, Braxton's "Composition 113" for solo Eb soprano saxophone (Sound Aspects, SAS 003) (It looks in the booklet photo and sorta sounds like a sopranino). I think it also was possibly his first ritual piece; when performed live (was it ever?) it included "a large photograph and prepared stage". In any case, it's a wonderfully concentrated work, the tiny horn doing yeoman's duty. I reviewed it for All Music here

Yet another interesting, partially very successful release is the duo with Richard Teitelbaum, "Open Aspects", originally issued as a double LP on Hat Art, currently available as a single disc, I think. (One of those double Hat releases in that superlatively awkward-to-open box!) These guys almost got into a rock-like, semi-Glassian mode once in a while. I saw them around this time on an odd double bill at an unlikely venue, SOB's, which for a short time in the early 80s was booking avant jazz musicians. On this night, AB and Teitelbaum shared the bill with Blood Ulmer's group, I think a quartet with Charles Burnham, Amin Ali and Cornell Rochester, though I'm not sure. The duo rocked out, though, really pretty strong. Wonder if there exist any recordings form that set or tour?

Gerry Hemingway makes his first (?) appearance with AB on "Four Compositions (Quartet) 1983" (Black Saint BSR 0066), along with George Lewis' return and Lindberg. Braxton's Composition 105A, after the them is stated, gets into a more extended, languorous group improv than he generally allowed earlier on, a nice change of pace.

Finally (at least in my vinyl collection prior to the Crispell/Dresser/Hemingway quartet), we have Vol. 1 of his standards group on Magenta, a subsidiary of (shudder) Windham Hill, my only release from that label, to be sure. Hank Jones, Rufus Reid And Victor Lewis, as fine a set of musicians as you could ask for. It's....ok, though I remain somewhat unconvinced of his traditional work when his comrades aren't otherwise in the same interest-set as AB. A bit too much oil and water. I'd prefer the trio on its own or AB solo, I think.

Reading: (or planning to)

Am I the only person appreciating your Brax musings? Even if so I'm glad to see 'em back especially since I *finally* got my mitts on Willisau :woot.

I'm perplexed by your thoughts on Birth Rebirth: "fairly momentous" versus "never entirely taken with it"?? What is it Ollie, thumbs up or down? That was a very important record for me in that I was struggling to figure out how to enjoy Brax and the setting worked better than controlled substances as far as the light going on. As I've commented elsewhere, it was really a fertile time for Roach.

I just meant the event itself, Braxton meeting with Roach, was momentous in its "hands across the generations" impact, for a godly figure like Roach to give his imprimatur to Braxton. Personally, I don't think the music quite reaches the heights I'd've hoped for. It's fine, just not stellar.

Composition 113 is my favorite from that era, too. And it is sopranino, not soprano, isn't it?

I always thought so for some reason, but the LP says soprano and I just checked Martinelli's discography and he has soprano as well. The photo included on the insert looks more like a sopranino than a soprano, though it actually seems to be maybe midway between the two. That's why I wondered about an "Eb soprano"--maybe it's a physically smaller instrument but not so small as a sopranino?

I'm satisfied it's a sopranino.

Second, I'm not a saxophone expert, but according to Wikipedia and my Google searches, the sopranino is an E-flat instrument and the soprano is B-flat. There is no E-flat soprano other than the sopranino. I'm not sure whether calling the sopranino an "E-flat soprano" is outright incorrect, or merely confusing.