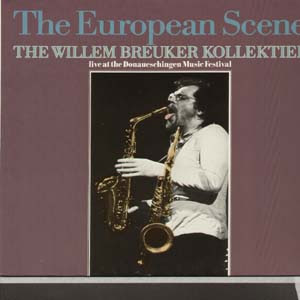 I've recounted this story before, elsewhere, but why not again?

I'm not sure of the date. I think it's December, 1978 though other sources have it as December, 1977. In any case, Environ had moved from its initial digs at 476 Broadway, going north a block and a half and across the street to 515 Broadway. Looking over the upcoming bookings, I noticed the the Willem Breuker Kollektief was scheduled to play three evenings. At this time, I had something of a strong antagonism toward European free improvisation, helped along by a few noodlesome shows at Environ and a couple of personally disagreeable purveyors of same. I was totally into the AACM and associated musicians and felt that, by and large, British and Euro improv was effete and anemic (though I made some exceptions, like Evan Parker, who had recently performed solo at Environ and was rather impressive). Took 'til the late 80s for this attitude to wither away. I'd not heard Breuker's music at this time but linked his name with other musicians in whom I had little interest. Looking at the listing, I thought, "Oy. Three nights of this nonsense I'll have to sit through."

Breuker's work filled a big gap for me at the time: Music that was highly structured and melodically rich but which left ample room for free improvising (though only in the solos, to be sure--it would be a few years before I realized how theatrically constrained WBK shows actually were). Mantler's "Communications" was likely the first such music to make a big impression on me andthat form would continue to afford fascination through Barry Guy's work with the LJCO, though I think I finally outgrew it. What's more, the Kollektief had humor.

That first piece was also somewhat in advance of the collage methods that would attain great popularity with Zorn et. al. in the coming years. The overture from an extended work aptly titled, "La Plagiata", it incorporated anthems and songs from numerous sources, all grafted into a complex whole. As the show proceeded, the band only became more amazing, twisting and turning on the proverbial dime, dissolving into chaos only to re-emerge more solid than ever. And the humor...You have to recall that this was at a time when overblown, self-important solos were part and parcel of much of the new music. During one piece, Breuker was soloing on soprano and as the band, music sheets spread in front of them, regrouped to forge ahead to the next section, he angrily waved them off in a clear "I'm not finished yet!" gesture. Put off, they gesticulated with annoyance at the music that indicated their re-entry but disgruntled, let him continue. A minute or two later, they attempted to come in once more only to be confronted by an increasingly infantile Breuker stomping his feet-- "I'm still playing!!"-- even as the music from his horn became more and more repetitive and simplistic. The band members flung up their arms in frustration and walked off stage, leaving Breuker on his own, where he eventually crumpled to the floor, refusing to stop playing, the strains of "Mary Had a Little Lamb" wheezing from his horn. Derisively self-referential jazz, gotta love it.

The first night at Environ, there were maybe 25 people in attendance. The second evening about 50 showed up, many clearly dragged there by visitors from the prior night raving about the band. I could hear people exclaiming over their tightness, the melodies, the rhythms, etc. As the lights dimmed, the members of the Kollektief began to drunkenly stumble toward the stage. They bumbled around the instruments, looking at them as though for the first time, holding them up to the light, banging them on the floor, mumbling and peering out into the audience. This went on for about 15 minutes. I could see furious guests chastising their friends, "You brought me all the way out here to see this crap?!?" Hunnekink picked up his tuba and tried to blow through the large end, Cuypers fell asleep under the piano. Finally, at some hidden cue from Breuker, the ensemble gripped their axes properly and, in a split second, catapulted into some fantastic arrangement or another. Very impressive.

Robert Palmer had reviewed the opening show for the Times and about 125 people arrived for the third night on the day the write-up appeared. The band added an additional performance at NYU as part of a Bartertown event, appearing in tuxedos at one point, engaging in some song and dance. They spent much of their time in NYC scouring the record shops, coming back to Environ with boxes of stuff (I recall Breuker had picked up every Rahsaan Roland Kirk album he could find). Had a lot of fun hanging out with Jan Wolff and Boy Raaymakers, both wonderful fellows.

Well, enough about this without even getting to the albums. More later (he said, to the chagrin of the eai crowd).

Oh, parting question to Cor or anyone else: What's the deal with those incredibly dorky group photos (with instruments) that adorn most WBK albums? I'm almost tempted to think it's some long-running joke.
Posted by Brian Olewnick at 12/27/2007 12:42:00 PM

"Oh, parting question to Cor or anyone else: What's the deal with those incredibly dorky group photos (with instruments) that adorn most WBK albums? I'm almost tempted to think it's some long-running joke."

Brian, did you ever see that photo with them and their instruments on which all of them (looking quite serious I may add) had their dicks hanging out of their pants?
That would probably answer your question....... :-)

No, really!? Never caught that one! Excellent long-term joke, if that's what it was, to have basically the same group photo album after album, year after year and then to insert one like that.