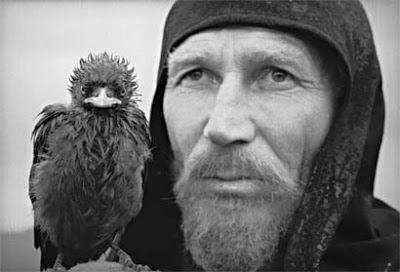 A couple of years ago, bored at work (an occurrence roughly as common breathing, including at this moment), I was cruising around imdb and noticed the option to rate movies and compile a little database of same. Well, as Uli is my witness, it's hard to resist rating stuff, so I spent a few otherwise unproductive hours assigning stars (1-10) to various films. I pretty much stuck to either things I enjoyed to a greater or lesser degree or picked out certain directors and went through their oeuvre. For the sake of balance, I included some major stinkers I happened to have suffered through but, clearly, I could pad out the list on the low end if I felt like it. If for some reason you're interested in seeing the list in its current state, you may do so here

I was determined to be chary with my 10's, though. Many beautiful, great, important movies received 9's from yours truly. I wanted my 10's to be ultra-special. I only recently added an eighth to the list (out of almost 500 rated), Almodovar's "Habla con Ella" (Talk to Her) and noticed that it was, by far, the most recent inclusion, beating out the closest competition by about 30 years.

I'm curious about that, though one obvious reason could be that I simply have yet to see movies from that period which I'll end up deeming as excellent. I hope that's the case (my current Netflix queue stands at 488, so I have plenty to go). Plus, of course, you have to discount the subjective and gross nature of the ratings themselves. Why did "L'Avventura" not quite creep into the 10s? Or "Seppuku", "Au Hazard Balthazar" or "Stalker"? Only only the last is post-1973. The nearest miss of recent movies would be "Werckmeister Harmonies". Anyway, here they are, alpha order, though the first listed is also, push comes to shove, my absolute favorite.

here's my current alltime top 20 list, I tried to stick to films I could fully get behind, and left out some pretty obvious ones like Citizen Kane.

the only overlapping one is Juliet of the Spirits, which is cool, not too many people have that on their lists. I assume you've seen 8 1/2, Brian?

I saw 8 1/2 a few months ago. While I liked it a lot, I wasn't as blown away by it as I know you were. Of the 10 or so on your list I've seen, I think I rate them all very highly. Almost all the others are already on my Netflix queue (though I added the Fassbinder, thanks). "Vredens Dag" doesn't seem to be available though. I saw "O Lucky Man" way back when but would have to re-view it to comment. Admittedly, Anderson's "Brittania Hospital" left a long-lasting bitter taste in my mouth...

My randomly selected flick (from my queue) for this week is "Madadayo". Plus, Linda expressed a somewhat surprising desire to see "Breathless" (not the Richard Gere version!) which I haven't seen for 15-20 years, so I have two good 'uns to look forward to.

I'm puzzled by the inclusion of "Hable con ella" and want to see it again now.
I have one of these YMDB thingies too: http://www.shompy.com/duif/l27783_ukuk.html

I just saw that a few weeks ago and I agree, it sorta stands out. Maybe I need more distance from it, but right now I think it's one of the most moving, human films I've ever seen. Maybe I'm just getting soft in my dotage but the nurse's love for his comatose patient was both strange, a little repulsive but ultimately really compelling. Add to that the relationship between him and the other male lead...well, the whole thing just killed me. It just seemed very real in a way few films are.

otoh, I can totally understand someone viewing it as a kinda soap-opera-ish movie, dunno.

I reckon Richard's top two will be "The Great Silence" and something by Tarkovsky.

"the only overlapping one is Juliet of the Spirits, which is cool, not too many people have that on their lists."

fweiw Sankt Ollewnick's top pick for 1965 was also one of the US Conference of Catholic Bishops favorite:

Those Catholic bishops were an OK bunch in '65, by gum.

that's got to be one of the least anonymous anonymous comments ever.

I evoked him in the first paragraph of my post and Lo! he appeared.

Hi Brian. "Talk to her" is also my favourite Almodovar's film. But the original title in spanish is not "Habla con ella", but "Hable con ella". A slight difference in the treatment you give to another person: "Habla" is more familiar, casual, and it's used when you've got confidence with the person you are talking with. "Hable" is more respectful, when you haven't got that kind of conficence.

Thanks for the correction, Javier. Interesting difference in connotation.

David, excellent list. I anxiously await "Satantango"'s availability in the US.

As in any such gross ratings, lots of these are close calls and could go back and forth depending on any number of factors. Jon (I guess) places Stalker over Rublyov, I feel the reverse, though I love them both. and so on, no matter.

I actually just saw Andrei Rublev for the first time recently, and really wasn't into it very much. the ending hour or so is pretty good, but it's a real slog getting there.

Interesting (thought you'd seen it a while ago). To the man on the street, both that and "Stalker" would be a "real slog". You find it to be the case with one, I don't find it with either. (nor with The Mirror or Solaris) I wonder if it has something to do with the religious environment of Rublyov? I only hazard that guess because of your expressed disinterest in religious-based classical paintings. Dunno.

I might agree about the closing episode, the bell casting, as being the highpoint. Absolutely amazing. Does anyone know if they actually cast a bell? That's the impression I had while watching.

Neat: I'd never poked around before in the vote history listings on IMDB. I think the only two films that Brian & I have both rated are in fact Talk to Her/Hable con Ella (which I liked but not as much as Brian), & Juliet of the Spirits (bleeeah). I think my own interests tend more towards pre-1960 films, hence the general lack of overlap.