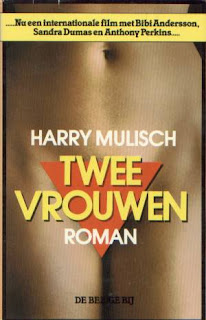 Breuker did a lot of soundtrack and theatrical score work, things that BVHaast began to issue in the late 70s. They tend to be pretty good, in some ways more listenable today than much of the WBK stuff if only because of the relative lack of bombast. 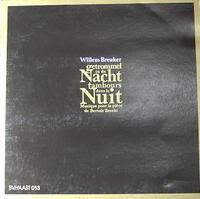 Getrommel in de Nacht, music for a play by Bertold Brecht, is quite engaging, mixing horns, strings, percussion and piano in a suite that seems to work very well as a soundtrack, that is it doesn't call too much attention to itself. The concluding waltz is really lovely.

Wish I could find a cover image for "Doodzonde", Breuker's soundtrack to a film by Rene van Nie. It's a rather enticing shot of a largely exposed woman's torso, her necked draped by an ornate crucifix, the Christ figurine's right arm having been severed so that his body is swung off to the other side , still pinned by his left hand. The movie, from what can be gathered from the stills included on the back of the album, looks like a pretty silly affair mixing "scandalous" anti-religious themes with bargain basement surrealism and worker's rights. I see Renee Soutendijk ("Spetters", among many others) appeared in it. Music is OK, heavy on the strings; the main theme is very attractive.

The image at the top of the post is, I take it, the original cover of the book by Harry Mulisch on which George Sluizer's film is based; the central "square" of it is also the cover of the BVHaast LP. The CD reissue, I note, shows quite a bit less than the album.... The movie seems to have been a fairly big deal, starring Anthony Perkins and Bibi Andersson and featuring the debut of a gorgeous looking Sandrine Dumas (listed as Sandra Dumas on the LP). I don't see it as being available on DVD today, perhaps as a result of Dumas being all of about 16 at the time and the purportedly intense lesbian scenes contained therein? (Rechecking, I see it came out on VHS in '85 and large portions have been uploaded on You Tube). Recorded in 1979, I think it's the first occasion of Henk de Jonge on record with Breuker and he contributes some fine accordeon work. There's more of a jazzy, bluesy (sometimes poppy) tone to the pieces, but again smooth and attractive.
Posted by Brian Olewnick at 12/30/2007 09:40:00 AM

During the sixties, the definition of "a virgin" in Holland was: a woman that runs faster than Harry Mulish.