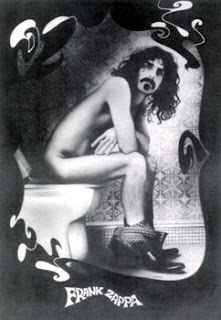 It's apparently a law of the universe that, at any music-oriented discussion board, the Zappa question is obliged to rear its head followed by boisterous defenses and sneering dismissals of same. Not sure if IHM had one before, but they do now. As is increasingly the case over the years, much of it (to me) revolves around the age of the individuals in question and when they encountered the music. (This is a basic issue for most contemporary music criticism--not just music either, but other arts) I'm probably one of the graybeards there, along with Herb, Jesse, maybe one or two others, so have a different perspective than many of the young 'uns who I gather first heard Zappa in the late 70s or early 80s when his music was (imho) godawful, tingeing their perceptions ineradicably.

Some background. My initial exposure was in 1970, 10th grade, when I bought "Weasels Ripped My Flesh". I don't remember why, exactly. I think I was searching for "new" stuff, the cover was pretty cool (to a 16-year old) and I'd heard of the band. Actually, I specifically recall an article in Circus magazine (now there's a nostalgia kick) about "ugly music". I think the author was befuddled why some bands (Mothers, Beefheart, MC5, Alice Cooper) were intentionally producing willfully ugly sounds. It turned out the "Weasels" was a hodgepodge of stuff from '67-'69, but I liked a lot of it and was baffled by some of it. The titles were weird (why would someone make up a name as bizarre as "Eric Dolphy"?!?!), much of the music seemed like pure noise but was interspersed with entirely catchy numbers like "Oh No" and rockers like "My Guitar Wants to Kill Your Mama". Anyway I was intrigued.

I think "Hot Rats" was next and it blew me away. Now, clearly, I was ready for this sort of step at the time. I'd been listening to King Crimson, probably Soft Machine by then and, though I hadn't heard any real jazz yet, was obviously moving in that direction. I'd always had an affinity for instrumental music so this album, with only a single vocal track (and that one fairly limited) and much jazz-based melody, harmony and improvisation, was just what the doctor ordered. At the time, unlike today, I was most taken by the less bluesy pieces, particularly the closer, "It Must Be a Camel" (with Jean-Luc Ponty). That (apparently, though not in actuality) loose structure, the total lack of AABA formula (which I still hate), the quasi-movie soundtrack moodiness--all of it was immensely appealing.

I quickly went back and filled in the prior catalog with the exception of the first two records, "Freak Out" and "Absolutely Free". Friends had these, though, so I heard them as well. I think I was initially off-put by the amount of vocals and the generally song-oriented nature of albums like "We're Only In It for the Money", preferring "Lumpy Gravy", "Burnt Weenie" and the instrumental portions of "Uncle Meat" ("King Kong"!). In fact, I probably gave them too short shrift at the time. However, one thing did stand out: that Zappa was willing and able to puncture not only the obvious hypocrisy of the middle class, but also that of the hippies. I'm not sure that I can convey how transgressive this was. You just didn't do this in 1967. I was coming to it a few years later when the notion was beginning to take a more general foothold (early National Lampoon, for instance, some of Ramparts, etc.) but it was still thrilling to hear this no holds barred, nothing sacred attack. "Oh, my hair's getting good in the back" absolutely encapsulated the shallow, would-be hip attitudes of my contemporaries (and me, to be sure). I think this is one of the basic reasons he's so intensely disliked by some: that he saw through bullshit on the part of both the establishment and the counterculture and wasn't shy about explicating it. Arrogant, even.

I remained a fan up through "Chunga's Revenge" (1973?). In between, Zappa released albums like "Waka Jawaka" which, I confess, ranked as my favorite "all-time" (like that meant anything for an 18-year old) in early '72. That summer, while washing dishes out on Block Island, the two songs constantly being hummed or whistled by me were the title cut from this one and Ornette's "Law Years", having made the leap and purchased "Science Fiction" that spring. In a nice bit of synchronicity, my jazz obsession bloomed just as Zappa began his painful slide into a wretched combination of adolescent bad-boy lyrics and sterile fusionoid music. Unfortunately for an accurate representation of his career, I fear that this latter stage, when he achieved some marginal popularity with garbage like "Don't Eat the Yellow Snow", was the point at which many listeners a few years younger than I first heard his work so I can't really blame them for looking no farther. I've always felt that he should've stayed in New York after '68 and been forced to deal with musicians on or above his level instead of the much more meager set of talents available in LA. He coulda been a contender.

I traded in all my Zappa/Mothers albums in '76 when I divested my collection of virtually anything rock-oriented. It wasn't until about '89 that I picked up "Hot Rats" again on disc. As I mentioned above, my relative likes had flip-flopped. Though I still enjoy the more baroque tracks (although "Peaches..." grates on me a bit these days), it's "Willie the Pimp" and "The Gumbo Variations" that sound great today. Zappa's guitar work on the former is marvelously inventive and Sugar Cane Harris, as well as FZ and Underwood are mighty fine on the latter. I eventually filled in most of the commercially released material up through '71 (I declined to re-investigate "Ruben and the Jets") and find that it holds up extremely well. I don't care at all for "Absolutely Free" and would even posit that the difference between "Freak Out" and that one presages the problems he'd have later on. He wove some wonderful melodies in those years, a gift that, to my ears, completely evaporated by the early 70s along with his acute satirical sense.

I heard a handful of later things, including the much vaunted "Yellow Shark" and they inevitably left me cold. However, I think in fairness you have to differentiate between stages of his career. I get the strong impression that many make a summary judgment based on a limited (and, to be sure, awful) sample. But that's like judging Beefheart on "Unconditionally Guaranteed" and "Polka Dots and Laser Beams".

For others, I'm afraid it's an insoluble age-oriented issue, certainly tinged with a dollop or more of nostalgia. Richard mentioned his inability to get into Monty Python and, difficult as that is for me to understand on a subjective basis, I guess I can see it if you came into them after their innovations had been absorbed, commercialized and diluted in common fare. This works both ways, of course. For myself, who thinks that Woodstock rang the death knell for creative rock, it's difficult to take seriously 99% of what followed. To my ears, it largely reeks of corporate product while for someone 20 years younger, something like Nirvana is going to embody all their creative aspirations. Them's the breaks. Their kids will laugh at them for taking Nirvana seriously while they groove to something even more sterile...

Anyway, not really a rant, more a plea for a fair, comprehensive assessment of Zappa's oeuvre (which admittedly, I haven't done with about the last 20 years of his work--it's just that nothing I've heard from that period causes me to wonder further and, as well, I'm just no longer interested in that area of music period). Not, of course, that everyone's going to enjoy any part of it even so, but more that it's not appropriate to lump it all together under any single judgment, good or bad. As usual, it's more complicated than that.
Posted by Brian Olewnick at 12/04/2007 09:28:00 AM

Zappa's catalog was reissued on CD when I was working at Time and getting quite a few promos, so I had a lot of it back then (40-50 discs?). you say:

"more a plea for a fair, comprehensive assessment of Zappa's oeuvre (which admittedly, I haven't done with about the last 20 years of his work--it's just that nothing I've heard from that period causes me to wonder further and, as well, I'm just no longer interested in that area of music period)."

the only difference between us on this is that you grew up with the early stuff, so there's a major nostalgic factor from your end. outside of 'Valley Girl', the early stuff was also what I heard first, but obviously much later. maybe it was interesting at the time, but it felt like mostly a waste of my time to listen to then, and I can't even imagine reconsidering it at this point. in fact, I still have most of the early CDs, and I should probably sell those at some point.

there's far too much music in the world for anyone to listen to, and it seems as if a few dozen records are more than enough to realize you have zero interest in an artist. what's somewhat unique about Zappa (for me) is that not only do I have zero interest, but I regret spending the time that I did with his catalog, searching for depth that simply isn't there. at least I got most of them for free.

Yeah, I never discount the nostalgia factor. I've written before that it may well (at least partially) account for my affinity to avant jazz produced in the late 60s and early 70s when I was first hearing the music. Still, if I throw early FZ on in the car (a favorite place for listening to it), I can't help it--it sounds good!

It isn't simply nostalgia. It's recognition of what formed us as listeners. I also cut my teeth on Zappa, but started with Freak Out and Only Money in the 7th and 8th grades. Nasal Retentive Calliope Music on the latter was my first exposure to musique concrète, which has become a significant element of my collection even until today. I strongly identified with Brian's post, even if the specific Zappa albums were different, because Zappa helped turn me away from the commercial pop-slop that was the standard in my junior high school. It clearly wouldn't have the same effect coming to it after our outside musical tastes have already been formed, because, like Jon said, it was a part of its time and not worth reconsidering today.