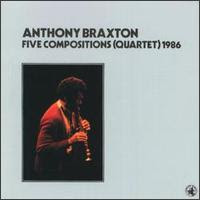 Only five more slabs of Braxton vinyl before everything changes over to disc. None of them feature the "classic" quartet as it turns out, though the first in the bunch comes close, substituting David Rosenboom for Crispell. It's a good recording, actually, probably underrated somewhat (at least I rarely see it cited). Compositions range from 88 to 131, so they're fairly contemporary with the session and largely in that more billowy, expansive vein. Braxton mentions in the notes having 230 "structures" with which to deal which I take it encompasses the 131 or so compositions and their alphabetic subgroups.

A couple years after this disc, I bought Rosenboom's "Systems of Judgment", on Centaur I believe, portions of which knocked me out. Really dense and lush--though somehow hard-edge--computer music. Had high hopes with him for a while but nothing else I ever heard hit me quite as hard, including his subsequent duo with Braxton, 'Two Lines'. Here, he's fine, entirely as proficient as Crispell, possibly more so at this date. 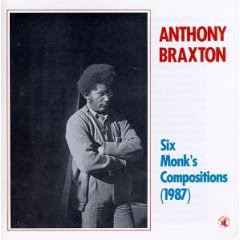 The Monk disc has never been a big favorite despite the presence of Mal Waldron, whose music I love and whose solo here on "Four in One" may be the album's highlight. Got to see him perform at Environ once, a very special evening. Here, it goes without saying that the tunes are lovely and they're adequately played but I don't get a real "reason for being". I've no doubt Braxton loves Monk's music but his own doesn't (to me) evince any special affinity for it (unlike his obvious warmth with regard the Tristano school). Buell Neidlinger's on hand as well. iirc, he may be the only person to have played with Stravinsky, Cecil Taylor and Zappa.

Biggest cover image I could find! Too bad--always liked that cover. Really as much a ROVA album as a Braxton one, side one features compositions by Ochs and Raskin, side two AB's #129. I was always hot and cold on ROVA, generally preferring the grit and soul of WSQ but I never delved so deeply into the ROVA catalog to say definitively. (And won't now, to be sure). Ochs' "The Shopper" is a good, propulsive piece, the kind of largely unison number that chugs along well, an antecedent of the more exciting Brotz Tentet pieces of 15 years hence. Raskin's title cut is more obviously in WSQ territory, not bad but lacking the strength that band had at their peak. Braxton's piece is structurally more interesting than the others, more ambitious anyway, though the actual execution leaves me a little cold. Curious how it would fare with other musicians or different instrumentation. Should also mention that it would be nice to have the Sound Aspects catalog available on disc someday.

Speaking of unreleased to disc items, we come to "Solo (London) 1988", on Impetus (no cover image available, dammit), probably my favorite solo Brax this side of "For Alto". Really fine recording as well as the one where his cataloging inclinations are perhaps most clearly seen, each (non-standard) track isolating one particular sonic component upon which he elaborates. The first track, Comp 106C, is particularly strong, a whirlwind that seems to refer obliquely to Riley-esque minimalism (the good kind!). Lotta extreme sounds here as well. Three standards, including a lovely and impassioned rendition of "Invitation", a Dinah Washington fave that hearkens back to some of his earliest work like the Cecil Taylor dedication on For Alto. 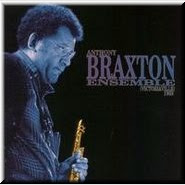 And finally, at the right hand end of the Braxton LP collection, is "Ensemble (Victoriaville) 1988". An impressive enough line-up with Evan Parker, Bobby Naughton (interesting to hear vibes with AB), Joelle Leandre, Hemingway, Paul Smoker and George Lewis performing Comps 141 + 142, both with additional collaged pieces. The titles have by now taken on the aspect of cityscapes; pretty neat, wish I could find images on-line. It drifts a bit, getting overly formless for my taste, or maybe I should say less rigorous than I want to hear.