Vertical Music is a new cassette label based in Milan, run by Ludwig Berger. A few words on their initial three releases below. 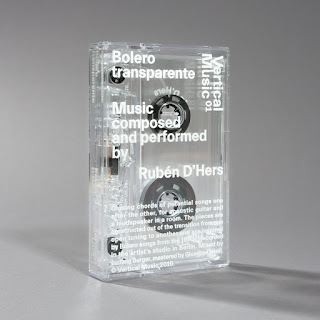 Three pieces for solo acoustic guitar. The works are inspired by the  "Bolero" song movement of the 70s, something I'm (blessedly?) unaware of but which, I gather, were very popular in D'Hers' native Venezuela among other places. I'm guessing they were quite the romantic/schmaltzy production numbers but D'Hers strips things down drastically, taking single notes and chords, playing them clearly, allowing them to suspend in space, quavering and bending gently, once in a while containing an echo of Hawaiian music. The first track, 'Romantic Chord Puzzle', outlines this approach. The chords and occasional arpeggios are independent, perhaps sourced from a sequence of otherwise unrelated songs. They hang, sometimes retuned, sometimes not, softly reverberating, their inherent richness tempered into a very attractive solemnity. The briefer 'Disipador de Tensión' moves things outside, the sounds of urban buzz and conversation forming a backdrop to guitar sounds that are similar to the first track, but more internally related, less disparate, almost a self-contained song--very lovely. Side B is taken up by the title track wherein the suspension is lengthened, allowing sections of silence between, and the timbre is roughened somewhat. This brings the music into significantly different and rewarding territory. The balance between the clear sustains and the sizzle and distortion around the edges is wonderful. Excellent work all around, check it out. 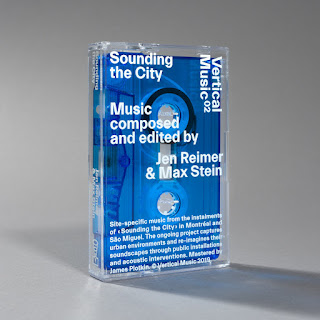 Reimer and Stein do site-specific sound installations, generally urban, wherein the add to the existing soundscape with electronics of a drone-like nature. I was most often reminded if Max Neuhaus installations, like the one in Times Square, New York City. The seventeen tracks here are titled by their locations and seem to be simply recorded extracts of the environment. These recordings are quite clear and full. Usually, one can pick out the additions from Reimer and Stein, relatively unobtrusive hums and tones, though sometimes these are (apparently) masked to a great extent--or you're hearing them without being able to distinguish between sources. This makes it difficult to determine whether the pair is operating along the lines of, say, Michael Pisaro's 'Transparent Cities' series, where sine tones were chosen to, as much as possible, align up with the environmental sounds, or like Neuhaus and others where the additions were meant to subtly enhance or tinge the surroundings, whether consciously perceived or otherwise. In a recorded format, the listener is, of course, at a necessary disadvantage and I can easily imagine, in situ, an entirely different experience, probably a vastly more rewarding one. As is, the pieces make for engaging listening, not a problem at all, just a nagging sense that one is missing something. 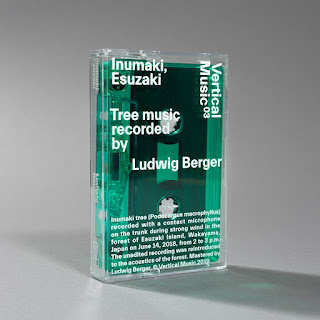 The inumaki tree is a variety of small pine native to southern Japan and  China; its miniature version is popular as a kind of bonsai tree. For this very obscure recording, Berger used a contact mic on such a tree (on Esuzaki Island) during a strong wind. I said "obscure" above as the resultant sounds bear no obvious relationship with either trees or wind. Instead, we have a series of consistent but irregularly spaced "cries", a sound I might have guessed was from some exotic bird, a kind of howler monkey or a single-string bowed instrument like an erhu, or even a slightly hoarse shakuhachi. The sounds are short, clear, a little mournful with something of a descending line, somewhere between a whistle and a resonant scraping. In the background, you can just discern the sound of wind. I'm guessing one is hearing the same wind pass through the tree, the recording having been pared down to just the sound we hear here, though I'm not sure. There are occasional variations during the hour duration of the work, small clicks, rumblings and hollow taps, even the odd flatulent eruption. It's a challenging piece but one I found strangely absorbing. Little occurs but something about what I take to be the natural rhythm of the interaction between wind and tree, I found compelling.

I saw this and I remember when I was a kid or using that classic music record. But now I search the Internet for classical music. to download free tonos de llamada clasicos for your phone is a bit more classical.

Free ringtones for everyone.
Unique ringtone. Ringtones are attractive. Ringtones have nice melodies. Ringtones fun. Latest ringtone 2020. Do you have your favorite ringtone on your mobile phone? I will more ringtones:
Life of ram ringtone download
Download
https://zigtone.com/bollywood/ishare-tere-karti-nigah-ringtone/
Navratri ringtone

This is the most popular ringtone in 2020, you can install it for free by following the instructions below: ZigTone

Your phone needs a new ringtone. Wish you have the best ringtone selection. Thanks for care!mention my favorite ringtone in 2020. You can view my home page for reference and search.

If you have a variety of ringtones, unique ringtones, latest ringtones, iphone ringtones. My homepage can be accessed: Zigtone.com
Thank you for your attention.

The current discs are no longer available, but it is a childhood sky

Your article is really addictive. Keep posting. keep sharing the knowledge. I love to read your articles. Thank you for sharing this article with us. This article will make a good reference for me. Thanks a lot. It is appreciated.
english short english stories

I used to listen to these songs on free ringtones: https://tonurideapelgratuite.com/