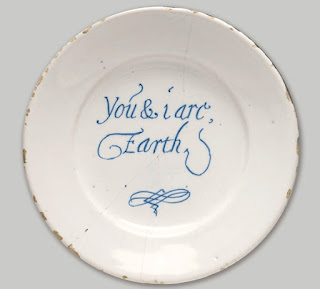 Vanessa Rossetto - you and i are earth (Tone Glow)

It's been ten years or more, I think, since I received a package in the mail from some hitherto unknown person in Texas, said package bearing three CDs in black sleeves, the discs sporting the odd titles, 'Imperial Brick', 'Whoreson in the Wilderness' and 'Misafridal'.  I was pretty knocked out by these very fresh, dense works from Vanessa Rossetto combining viola, found sounds, tapes and much more. The intervening decade has yielded much more fantastic music from Rossetto and this one continues that fine lineage.

'you and i are earth' is the first release on Joshua Kim's new label, Tone Glow--an auspicious beginning. No extra information is provided as to sources and methods, leaving your hapless reviewer to make assumptions that will doubtless turn out wrong but I would often rather just go from my ears than ask questions, so...there are four works. 'the dirt' commences with the reminiscences of an elderly women, apparently recalling her experiences in London during the Blitz. This segues into a dense, wooly rumble, a typically (for Rossetto) complex stew made up of who knows how many elements; something very propulsive and surging about it despite the lack of anything resembling a beat. We hear faint echoes of sirens, muted string music, someone singing 'The White Cliffs of Dover' and much, much more, beautifully layered in. There's a wonderful breadth to the piece, a sense of scanning history, sometimes clearly, sometimes murkily. It ends with a male voice repeating, "All clear". 'a flower arrangement (pro eto 1)', is a fascinating, quasi-drone piece, subdued, made up of several layers of buzzing tones, more than several I think as you pick up strand upon strand when listening closely--some electronic hums, others like strings vibrating against resonant surfaces. Concise, eerie and compelling. The title cut stands apart a bit, and is my favorite of this excellent set. Starting with a hymn on church bells ("The Church's One Foundation"?), it melts into what sounds like multiple lines sourced from strings, some possibly Rossetto's own viola, some from elsewhere (?), the whole forming a very complex but graspable thread--or rope--, deep bass bowings coming in, seesawing underneath more anxious playing atop--a really marvelous and slightly unnerving concoction. 'a garden (pro eto 2)' closes the album softly, though nervously enough with dry, lightly touched viola over a more tonal bed of string chords, voices joining as if from some ethereal choir, eventually just a mix of strings, gorgeous and creamy, forming unusual and enticing tonalities as they overlap and ultimately fade.