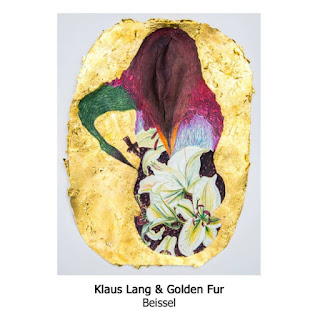 Georg Conrad Beissel (1691 - 1768) was an odd bird. Born in Germany, he emigrated to the New World, settling in Pennsylvania with like-minded religious...extremists to await the Second Coming. During this inevitably disappointing period, he established a community at Ephrata, Pennsylvania which, while somewhat in line with other such ascetic groups, was modeled on proto-socialist principles and was an early adopter of vegetarianism. More to the point of this release, Beissel developed a unique form of musical composition, one he said was inspired by mystical experiences via angels, which relied on "predetermined sequences of 'master notes' and 'servant notes' to create harmony", a system that some say anticipated serialism.

Klaus Lang (organ) and Golden Fur (Samuel Dunscombe, clarinets; Judith Hamann, cello; James Rushford, viola and harmonium) have collaborated on a unique and ravishing work that takes aspects of Beissel's music as a starting point and expands outward from there. The organ used by Lang resides in the abbey at St. Lambrecht in Styria, Austria and its sound surfaces throughout the recording. For all its apparent structural differences, the underlying character of the Beissel hymn that the quartet elaborates on seems to share some tonal characteristics with those in the standard Protestant repertoire, works by Wesley and others. As mentioned by Dunscombe in the interview on the Another Timbre page, they took a hymn and elongated it, stretched it out over some 41 minutes. The abbey interior is apparent from the first moments, the soft, drifting notes floating like mist in a shadowed space. When the organ enters at full steam about four minutes in, it is indeed a transfigurative moment--one can almost imagine an angelic apparition. The hymn is embedded in this fog, stretched and pulled (gently). The strings swaddle it, prodding it along, defining its limits as best they can. There's something almost anamorphic about the piece, its fundamentally recognizable attributes (especially to those of us reared in that tradition) skewed and extended. Some of the sonorities achieved (from whence, I've little idea, though certainly the organ is involved) like the deep growl that emerges around the ten-minute mark, are in and of themselves astounding, so deeply rich. There are long sections of near stasis in the middle of the work  filled with tiny fluctuations and gradual attenuation, including one with the surprising introduction of bell tones. Toward the piece's conclusion, the quartet returns to a clearer exposition of the hymn, still attractively warped but calmer, more "at home".

A brilliant idea and recording, one of the more striking pieces of music I've heard in recent months.