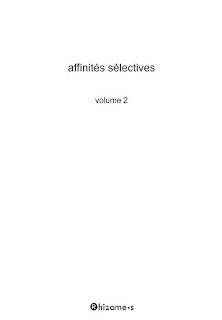 The second split release under the title, "affinités sélectives", with two sets of musicians performing pieces not necessarily related to each other, though here involving referrals to earlier musical works.

The first track finds The Pitch (Boris Baltschun, electric pump organ; Koen Nutters, contrabass; Morten J. Olsen, vibraphone; Michael Thieke, clarinet) playing the intriguingly titled, 'The Pitch translating Olivier Messiaen "Louange à l'Éternité de Jésus". This section of 'Quartet for the End of Time' is, in this listener's opinion, one of the most sublime passages in 20th century music, so I was curious to see what this ensemble, fine musicians all, would bring to the idea. Somehow just reproducing the music wouldn't make much sense and the quartet avoids that, though the extent to which they play around the themes creates substantial ambiguity between their creation and the original. We hear a long series of overlapping tones (I think the vibes are being bowed or very softly struck). It gradually becomes more expansive, containing more slowly fluctuating tones, creeping little by little toward the tonality of the Messiaen. Some 18 minutes in, the tones end and a doleful bell is heard tolling for two minutes. When the other instruments re-enter, the mood has changed, becoming more somber, with the sharp vibraphone strikes recalling the piano in the original piece. The voices enter one by one in a shorter, sourer, rising sequence, possibly referring to the ascending-into-the-ether conclusion of the Messiaen. Just a few minutes from the end, the clarinet quotes almost directly from the Louange, preceding a forceful and funereal sequence that concludes the piece quite movingly. A lovely work.

A note from composer Oliver Thurley underlies the second track: 'a technical diagram for the abstraction of ockeghem's missa pro defuncis: kyrie, side elevation'. This refers to a requiem I don't know, so I've no idea about the relationship. It's performed by Barbara Konrad on viola d'amore and Klaus Lang on harmonium. Similar to the prior work, it revolves around long-held notes, here with the harmonium providing drone-like underpinnings (with a good deal of complication and shifting) and the viola d'amore adding sinuous, sometimes acerbic lines atop and through and they do convey a hard-to-pinpoint Renaissance aura of a sort. It's enchanting and dreamy in a nicely sour way. When the pair finishes playing, they comment on the weather where it was recorded, in blustery northern England. Perfect. 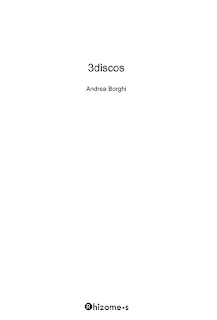 Seven tracks from Borghi using prepared turntables playing discs made from marble, resin and text-engraved aluminum. There seem to be ancillary activities occurring as well, but the listener clearly perceives the basic rotational source of the sounds. Within this focus, Borghi, as usual, manages to create entire worlds, endlessly, unpredictably detailed. His work often reminds me of pieces from the Arte Povera movement, with gritty, everyday materials handled in such a way so as to reveal the immense complexity that lies beneath their surfaces. These pieces are active, bubbling and scurrying but never over-busy--one gets the sense that the aural emissions are somehow secondary to the opaquely functional processes going on--the sounds these machines happen to make, Of course, it's Borghi who is guiding the wheels here and his choices are exemplary throughout. Fans of Jeph Jerman will find much to enjoy here.

A ringtone or 着信音 is the sound made by a telephone to indicate an incoming call or text message. Not literally a tone nor an actual ring anymore, the term is most often used today to refer to customizable sounds used on mobile phones.