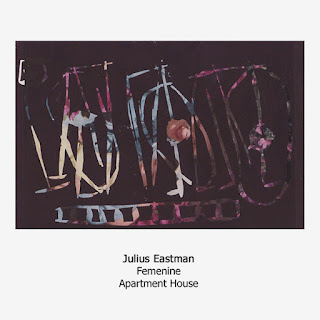 The last few years have seen a small but welcome surge in recordings of Julius Eastman's music, music that had been ignored or lost for decades. As there are a limited number of compositions available, some in fragmentary form, we can expect to hear multiple readings of a given work. In 2016, Frozen Reeds released a 1974 recording of 'Femenine' by the S.E.M. Ensemble (of which Eastman was a co-founding member). This recording, as near as I can determine, is the only one that's been realized since then.

Listening to that 1974 performance, one gets something of the spirit of the 1968 recording of Terry Riley's masterwork, 'In C', the steady piano replaced by sleigh bells (also recalling the maracas in Reich's 'Four Organs'). Here, there are no cells of mini-passages to be read through in sequence, the number of repeats to be determined by each musician, but the iterated vibraphone line has something of the same utopian sensibility, a kind of joyous fanfare, echoed and accented by strings and the piano. There's a fine balance between the rigor maintained by the vibraphone line and the expansiveness generated by the other instruments as they, one gets the sense, feed off of it, but their growth patterns possess an attractive/ungainly almost vegetative complexity.

For this session, Apartment House consisted of Simon Limbrick (vibraphone), Kerry Yong (piano), Mark Knoop (keyboard), Mira Benjamin (violin), Anton Lukoszevieze (cello), Emma Williams (flute) and Gavin Morrison (flute). The first noticeable difference is that the vibraphone is somewhat more muted, less brash, sacrificing perhaps a bit of bravado for a more contemplative feeling, a move I quite like. When the piano enters with low tolls, they're also less dense, somehow more thoughtful, conveying a gradual sense of unfolding. There's a substantially greater clarity in the recording. For example, there are many piano lines that may well have occurred in the S.E.M. session but which I certainly couldn't pick up--they're perfectly clear here and add greatly to the depth of the work. At the small cost of, perhaps, doing away with a bit of the ecstatic component present in the initial recording (maybe due, in part, to the sheer newness of the work at the time), Apartment House has achieved a limpidity, delicacy and breadth that I find more rewarding, allowing multiple re-listens that expose new layers and relationships every time through. The more languid passages that start up around the 55-minute mark here are just luscious. The whole piece not only breathes but gets up and scampers.

A beautiful realization and a must for those who have become enamored of Eastman's work in recent years.