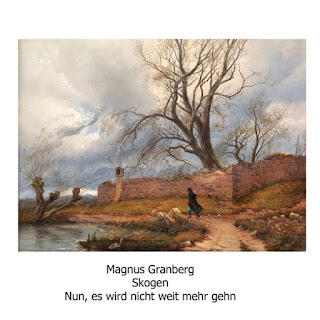 The English translation I found most apt for the title of this disc (a line from 'Die Krähe', from Schubert's 'Winterreise') was, "Well, it will not go much further", though the composer uses, "Now, there won't be much more walking". Combined with a perusal of the lovely painting by Julius von Leypold, depicting a man walking through a blustery landscape, I found this helpful in discerning a way around and through Granberg's music, something that's given me a certain amount of difficulty in the past. Much of that "problem" (surely more my issue than a general one) was ascertaining a structure that I could grasp onto. By approaching the music as a kind of walk, with little or no expectation of points of particular interest, simply getting into the rhythm of certain quasi-regularities--the path, the growth along the sides, the odd stone of tree--I found it an engaging, rewarding experience.

For this recording, Skogen is essentially a nonet with strings and percussion, consisting of Anna Lindal (violin), Angharad Davies (violin), Leo Svensson Sander (cello), Erik Carlsson (percussion), John Eriksson (vibraphone, whistling), Henrik Olsson (percussion, objects, contact mics), Petter Wästberg (objects, contact mics, mixing board), d'incise (electronics, objects) and Granberg (prepared piano). I have no idea about the score or instructions therein, but in one sense--not a negative one--the music meanders for its 56 minutes, or perhaps it's better to say that it ambles, slowly. There are small quasi-rhythms scattered throughout, from a tapping right at the beginning to various vibraphone and piano sequences, patterns I equate with steps taken by the walker, going for a bit, pausing for a look at something, continuing. These sharper sounds weave their way through a haze of lines from the strings, maybe light, cold rainfall. There's an amount of stasis, the kind of sameness (though, of course not sameness) one might experience walking through a purportedly nondescript field. Soft gongs answer birdsong, the landscape drifts by, dulcet here, more acerbic there. Released steam, the rattle of branches in the oncoming wind. It's really like a closely observed, sensitively experienced stroll through space. In the last few minutes, there's a wonderful set of brief cadences on medium low percussion (tablas?), an entirely beguiling sound. I felt as though I'd found an especially beautiful stone or a centuries old coin.

Excellent work, attentively and sympathetically played by the ensemble.