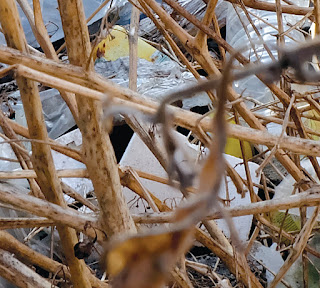 This release has special resonance for me as the sounds were recorded in and around the neighborhood in Paris where I lived for two years (and where La Casa resides). We spent many a day walking and biking along the Canal Ourcq, both inside the city proper (within the Périphérique) and out into the banlieues of Pantin, Bobigny and beyond. La Casa and Sprod (perhaps better known by his nom de musique, Tarab), wandered along the canal as well as the abandoned railway, known as La Petite Ceinture, which circles Paris, largely underground but exposed at several points including in the northeast section of the Parc Buttes-Chaumont and at several other points in the XIX and XX arrondissements, including a bridge over the canal. The recordings were made in 2015 and processed over the last couple of years.

As is generally the case with La Casa's work (Sprod's as well, to the extent I'm aware of it, mostly from work done ten to fifteen years ago, although there's a new one from him as well that I'll get to soon), the sounds captured and presented walk a line between the mundane and the mysterious. That is to say, the sources are everyday, grimy, urban--things that occur routinely all around us, but are morphed into precision sound worlds that isolate, combine, make transparent, add vast depth to the ordinary, making them alien and wonderful. Here, they apparently dwelled in waste areas, the cover image showing garbage behind a scrim of dried branches. Bumps, rustles, gurgles, metallic bangs, wires zinging, clicks, obscure screeches--the world is rich in noise, clear deep and not a little troubling. The way the four tracks have been structured also strikes a fine balance between seeming randomness and implied narrative, the final track closing the expedition with an explosive, dynamic flourish. 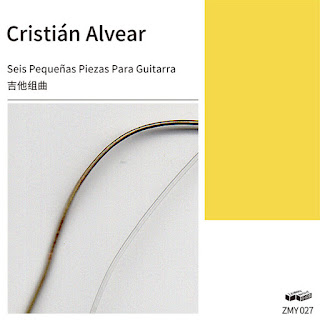 Known primarily as an interpreter of others' music, including composers associate with the Wandelweiser group, Alvear creates a good deal of music on his own. This cassette collection of six pieces for solo guitar is an excellent example. The music is easy enough to describe but another matter to describe the effect and experience. Alvear is exceedingly clear--he plays single notes, tonal and warm, in a slow but regular cadence, sometimes leaving them hanging, sometimes accompanying them with a second tone, sometimes playing arpeggios, letting them shimmer for several seconds, as in 'III' here, elsewhere cycles of four notes with additional, irregular accents. The pitches chosen will usually generate gentle overtones and pulses and while one sequence will be repeated quite often, when Alvear shifts the pitch, the difference is both striking and, oddly, emotional, as though the listener's sympathies have been discreetly constructed all along, without one's noticing. While contemplativeness is present throughout, the mood changes from brighter to more somber ('V'). The final track, 'VI', one of the cyclic pieces, bears a trace of a Chinese scale, perhaps a nod to the label, which stems from Beijing. As with all the works here, one might indeed make some kind of analogy to classic Chinese ink brush drawing--I can think of worse comparisons. A very beautiful release, highly recommended. 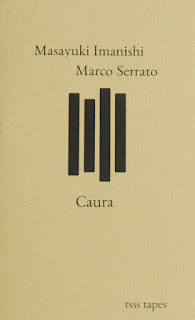 Imanishi uses field recordings as well but unlike, say La Casa above, I think (no details provided on this cassette release) that they're deployed in a realtime improvisatory manner, here accompanied by bassist Serrato. This creates an atmosphere that, going from what I can discern of Serrato's attack (I don't believe I've encountered him--or Imanishi--prior), has tinges of free improvisation, or even free jazz. Serrato uses plenty of extended techniques, sawing and agitating his bass in a manner that wouldn't be out of place in a duo with, say, Han Bennink or Jack Wright. But embedded in the swirling, thick swarms of noise generated by Imanishi (from sources difficult to identify), the bass can possibly be heard as an anguished soloist in front of and within this quasi-orchestral morass, especially on '#1'. On the second side of the tape, the bass is more out front and Serrato evinces some impressive ideas, harsh and abstract. Imanishi's contributions are lighter, more ethereal, even a tad spacey for my taste. But as the track progresses, this aspect dissipates and smoother, grainy and complex flow emerges, the bass settling in to scratch and paw behind and beside, and the music achieves a satisfying level of fluttery tastiness.

I really like your blog, one of the best content Can Someone Do My Essay For Me

This is rather an interesting idea to record the sound at the places where you are walking. When I was at school I also do my excel assignment https://mid-terms.com/do-my-excel-assignment/ thanks to the source I got from my older brother. My assignment was based on sound recordings as well.