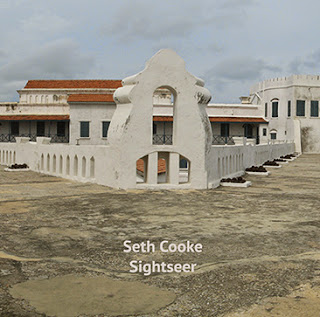 It's easy, probably all too easy, to draw comparisons between field recordings and photography but I do like, in certain instances to think about snapshot photography, the work of people like Garry Winogrand and Todd Papageorge, when listening the work of people who consciously veer away from anything traditionally evocative and towards sound that, on the surface, seem to have been almost randomly chosen. In the same sense that simply by virtue of its components, a snapshot photo will contain vast amounts of information--audio, sociological, what have you--so might a "snapshot" field recording.

This may be piling too much weight on Cooke's offerings here: nine tracks on a 3" disc, but there's something about their "ordinariness" that summons these thoughts. The one-second wash of sound that constitutes "Traveller's Checks (sic)" could have come from almost anywhere; something equivalent to an accidental, blurred photo. The next track's 68 second have more a sense of place, however vague and activity, assuming the bowed shell of the title is the source of the keening sound we hear. We begin to parse out inevitable, even if "undesired" specialness, more so in the ensuing clicks, soft pings and mechanized voice nestled into the indistinct, sometimes aflutter ambiance of "Window Shopping". Cooke's titles seem to vacillate between the deadpan descriptive and the sardonic; one wants to hear the muffled, difficult-to-discern groans of "Weekend Soul Retrieval Workshop" as, well, a soul being retrieved. One listens more and more closely, determined to figure out these un-figure-outable snippets. The mini-epic, "Santa Barbara Christian Field Recording Association" manages to remain singularly opaque with reference to either title or source but is a hell of a lot of fun to wallow in. We tumble through the closely miked violence of "Self-Catering/Package tour", into the wind-scoured wasteland of "Hotel for November" and, finally, for another brief second, a glimpse of Hell in that FLAC we need to hear.

Fine work! A bracing tonic to the endless stream of birds, cars and water gurgles. 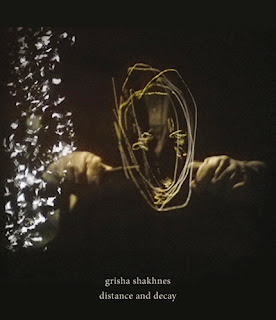 Shakhnes adds yet another volume to his impressive string of strong releases, retaining ties to past work on the one hand, moving into subtly different areas on the other.

The opening track, "so close to home" ism indeed, something like that, displaying the Shakhnes we've come to know and love; dark and grainy, rumbling with multiple layers of sound, as though subjected to a rough grind, through some processing mechanism that leaves copious lumps and irregularities. There's more going on at any given moment than you can hear, causing an odd experience on subsequent listens-- the "Hey, that wasn't there before!" response. Some sounds are looped, other not (or, at least, I don't think so; maybe lengthier loops). It churns, new elements swiftly incorporated in the grimy swirl. Ingredients dissipate, the mix turns dry and choppy, re-forms into a mass of what seems like engines or generators, with looped pops, imparting a somehow wet feel, sublimates and fades;classic, if you will, Shakhnes. "air" almost sounds as though recorded near the prow of an ice-breaker for the first few minutes but it soon degrades, quite beautifully, into a sequence of dronelike sounds including, I think, recordings of Mideastern music, bleeding through the stuttering taps and pervasive hiss. Possibly a distorted recording of a stringed instrument surfaces, disappears under shuffling and the frozen wastes return. It's a lovely, even moving work and a bit unexpected in parts but the next cut, "concrete" is even more so, beginning with a quasi-tonal hum, or layering of hums, a continuo that girds the piece throughout in one form or another, beneath whistling wind and undefinable rumbles. This creates a wonderful, kind of tidal swell beneath things and Shakhnes is quite careful choosing the textures of the sounds above to allow space to form between. The undertones disintegrate somewhat when we move into some large interior spaces, but there's always a lingering trace, subtly propelling one forward. "slow life" is a mini-maelstrom that I can't begin to parse. At a mere nine minutes, it's gone before I can grasp it but it's intensely tantalizing.

The Shakhnes odyssey continues, one excellent release after another. Get this.