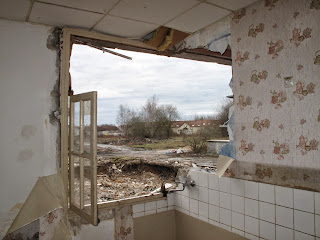 Not your standard improv outing, no walk in the park. Angle consists of Jean-Philippe Gross and Jean-Luc Guionnet (each on electronics, I believe, Guionnet also wielding his alto) engage in rough play here, constructing entirely abrasive sounds and unpalatable blocks of noise, dismissing any notion of pleasantry. And it works quite well. When, early on, Guionnet's flat, harsh, affectless alto tone is welded to an even harsher, more brutal one, it bores a clean, smoking hole in your skull, not very nice. The relatively quiet section that starts shows a fine disregard for the normal way of things, sending through opaque electronic ropes and shimmers, nothing very appropriate, events carried along by force of conviction. It plunges into digital silence at the flick of a switch, emerges 15 or so seconds later in an entirely different space, hissing steam and irregularly pounding metals that resolve into a seesawing, low thrum through which a pitiful alto whines (I've no doubt intentional), very effective. A solo alto section, highly controlled yet disjointed, followed by a quiet sequence which stands out, oddly enough, in that it does in fact conform to some areas we've familiarized ourselves with in this genre over the years; strong on its own, interesting when placed in this set. Perhaps more surprising, we then hear Guionnet playing a very soft, simple "melody" over rumbling electronics, very attractive, I daresay, more so when the tone is splintered into delicate overtones, the electronics softly prodding (I'm thinking, due to the latter's exact overlapping, they might be generated here by Guionnet as well.). That's where it ends, having travelled from blunt and awkward to faux calm. A disturbing set, posing questions. Good stuff. 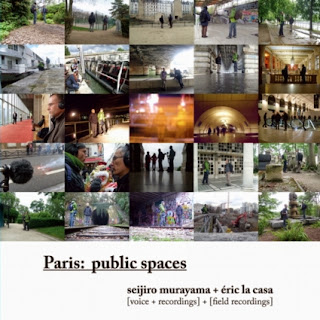 La Casa writes, '"Paris as it is"in our daily life, with its ordinary but intimate moments captured in public spaces, with its delicate nuances of atmosphere.', and that's what we get, following he and Murayama into several neighborhoods (some within a stone's throw of my desk as I'm writing), observing closely and clearly, making the occasional interjection but withholding any judgment but the most general, that this "scene" portrays something real about this city. We hear, I assume, Murayama making some discreet mouth noises now and again (quite possibly more often than I realize) though he approximates some conceivable local fauna. More pervasively, we encounter people, bustling, traffic--nothing so unusual but caught with a lovely clarity, in a beautiful "light", if you will. Each track contains some small wonder; I got a special kick from the Murayama's humming along (or athwart) the marching band heard on Part 8. La Casa has shown a fantastic ear in prior releases and does it again, having far more in common, in effect if not in mode of construction, with Luc Ferrari than with standard field recordists. (I'm not certain how much of the recording part was done by Murayama--I may be shorting him on that front; both likely deserve equal credit).