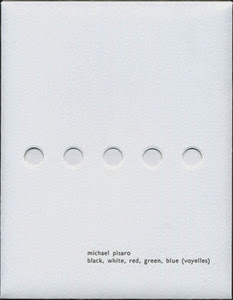 Just wanted to let folks know about this CD issue of items originally released on cassette in 2010. I wrote about the pieces then and am reprinting the brief entry (with minor editing) below. Suffice it to say that it holds up and then some, especially "voyelles" which is sublimely sink-into-able.

""black, white, red, green, blue" is performed solo by Chabala. It's an hour's worth of suspended, individual notes, of varied tone, length and texture, generally separated by five to ten seconds [it complexifies somewhat toward the end]. It's quite lovely and thoughtful, like all of Pisaro's work I've experienced, requiring fairly intense concentration and immersion to fully appreciate. His conception is amazing at suspending time and Chabala offers a very fine, sensitive reading.

For "voyelles", Pisaro took the same recording and infiltrated into it sounds sourced from sine tones and field recordings (possibly others). As good as the original piece is, "voyelles" really brings it into its own and makes it extraordinary. As with other works (like the great Transparent Cities set), Pisaro has an unerring ear with regard to precisely what sound will most strangely but somehow appropriately compliment a given instrumental tone. By adding a single layer, Pisaro multiplies the piece's depth many fold. A great, great work, one that unfurls differently on each hearing."

[been listening to "voyelles" all afternoon, here in August, 2014--immensely satisfying]