OK, another batch and then I'm outta here for a few weeks. 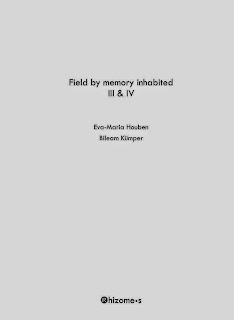 Two extended works from a score (unseen by this writer) by Duplant, realized by Houben and Kümper.

III is rendered by piano and viola. The first eight or nine minutes are all (or at least mostly) viola drones, only to be abruptly "disturbed" by a surprising piano arpeggio, like a pleasant awakening from a dream. A lengthy, non-digital silence. A similar up and down flurry from the piano heralds the next section, the viola following shortly, beginning in the same manner as he had played earlier but soon adopting a different set of approaches, sometimes skittering, sometimes swooping. If there's piano during much of this portion, it's faint enough to fade into the woodwork, until a bit later, some interior instrument noises emerge and there's an unexpected few moments of hyperactivity. It shifts a bit back and forth between these poles for the remainder of its 40 minutes. I enjoyed it pretty well, though felt there was some disconnect between the instruments. Admittedly, this reaction may well have been due to the contrast to "IV", at least partially because of the sonic nature of the instruments involved, organ and tuba (how many people double viola and tuba, btw?). Houben evokes gassy, breathy expulsions from her organ, woodenly knocking about now and then, and Kümper tends to do similarly, with obviously different timbres, on his horn; the pure sound is simply fantastic. As well, there's more continuity even as the elements slide though there are also the occasional stabs of sharpness and harshness to keep things honest. A strong work, worth the price of admission. 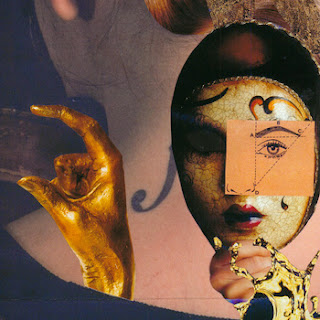 Gburek is a thoughtful fellow and this release arrives with plenty of text, both in the disc insert and in accompanying material. The former is poetic in nature while the latter encompasses Benford numbers, meteorological concerns (both "out there" and "body weather"), the 2012 US Presidential election and a biblical citation. I'm doubtless missing aspects of how these and other elements enter into "Visitations", but it's, in audio terms, more than challenging and sprawling enough to deal with on its own. The principals are Gburek (guitars, field recordings, bass recorder, electronics and processing) and his wife, Ossowska (violin, keyboards, penny-whistle, collages) with flutist Asia Zielecka making an appearance on one track. "Hallucinogenic" is one word that recurred in my head while listening; there's an intense, dreamlike feeling to much of the music, propelled often by Gburek's guitar (which often possesses a tone that toward which I'm not too partial) and Ossowska's violin (which I like very much) amidst a swirl of spacey keyboards and mutant field recordings, occasionally soaring along rockish heights, other times lingering amidst abstracted ambient sounds and small percussive noises. The violin lines (sometimes multi-tracked) tend to have a strong and very attractive Romantic quality, I might go as far as to say with a fine Polish or northeastern European cast; they provide some of my favorite moments on the disc. In fact, there are numerous episodes that are quite beautiful scattered throughout (the ending several minutes of the second track, for instance and all of the eighth); trying to process the work as whole, which I get the impression is what the musicians would like, is a tougher task. You pretty much have to succumb to its logic, something I couldn't quite do entirely, instead appreciating this section very much, the next not so much. But that's dreaming for you.

It's really an impressive effort though, even if I'm on the fence about it re: pure enjoyment. There's a lot to dig into. Oh, and there are thunderstorms. Loud ones. You can hear much of it at the soundcloud site below. 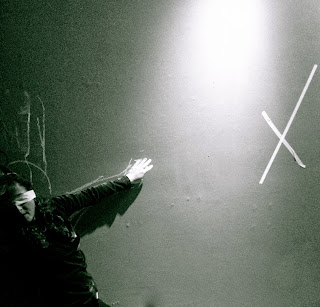 McGuire is a Boston-area bassist who has performed with many of that cities new music luminaries including Greg Kelley, Dave Gross and Mike Bullock. "Civilian" contains 12 improvisations for solo bass. It's one of those recordings that's really sufficiently outside of my current purview that I find it tough to honestly evaluate. McGuire is clearly an accomplished player with strong technique. Most of the music is bowed, almost all of it in the instrument's lower registers which yields a dark, rich atmosphere here. His approach might be said to lie somewhere between the lyricism of a holland and the assault of a Guy; I actually found myself thinking of Joelle Leandre more often than anyone else. He's not nearly as frenetic or show-offy as Guy can be (a good thing) but at the same time, I found myself wishing he'd investigate more tonal--in a word, straighter--climes; I think the results would be quite rewarding. He veers close to that once or twice here ("Delicate Creatures I", for instance) and it's lovely, comparable to primo Holland. For me, it's a tough assignment to carry an album's worth of solo bass (or anything) these days if you're not dwelling in a more contemplative framework where the sounds are allowed time to live and breathe on their own rather than rapidly being shunted aside to let the next torrent through. Obviously, that's me. Fans of post-free jazz bass will find a good deal to enjoy here. Me, I'm curious to hear what McGuire would sound like with a partner or two, especially if those persons came from a different vantage. You can hear for yourself at the bandcamp site below.