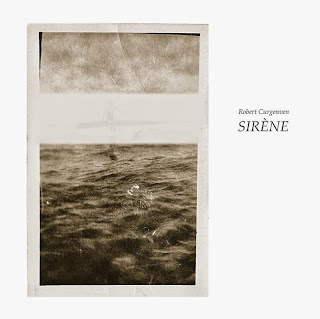 I freely admit to being a sucker for certain micro-genres and contemporary, drone-based pipe organ is surely one. Despite that caveat, Curgenven's "Sirène" is a real treat. I'd previously heard and enjoyed a bit of his music on a winds measure release shared with Will Montgomery. For this LP offering, he uses unprocessed pipe organ (recorded in several different churches) augmented in parts by turntable and other sources.

Curgenven tends toward (more or less) traditional organ tones, that is, nothing too extreme in terms of airiness, extreme grinding or other extended techniques. But he arrays these tones wonderfully, layering contrasting lines, each of them pretty much tonal but, in combination, resulting in a fascinating chromaticism. The first track engages in this while also possessing a rising and falling swell, the elements shifting, cloudlike before evanescing into less linear, more amorphous shapes, cultivating a growing sizzle of alien sputters. These extraneous, though quite welcome, noises manifest clearly on the second track, "Cornubia". Ebhind an even more sonorous skein of organ tones, one hears first some vague shuffling and sliding, soon resolved into what sound like slaps on a hard, wet surface. The massed organs well mightily before, again, faltering as they splay outwards. Side B is taken up by "Turners Tempest + Imperial Horizon", a generally less tonal, reedier work. While building strength, it nonetheless flutters and shudders; what sounds like a blurred but enormous mass of hornets hovers over the affair for a while. The first half of the piece is like some mythic, shambling beast, falling, rising and continuing, beset by swarms of static. As before, however, matters are smoothed out somewhat, as though the creature emerged onto a flat landscape even if, as it progresses, irregularities become apparent among the shimmerings. Four minutes from the end there's a cessation. When sound reappears, it's distant, almost underwater. A foggy orchestra, lost in reverberation, brings things to a close.

A unique, superb recording. Don't let it pass you by.