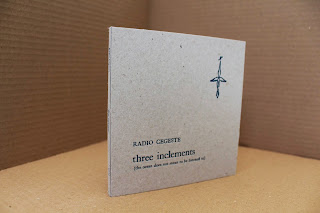 I've been wanting to hear more of Sally McIntyre's (Radio Cegeste) work since her collaboration with Lee Noyes a couple of years back and this one satisfies that desire quite well. Three pieces, each fairly short (total disc time less than a half hour)and concise. The titles make one curious about the contents. "a lagoon considered against its archival image", for instance, a series of statics amidst thunder and rain (one of the inclements), the former tearing jagged holes in the fabric of weather. Some faint beeps (shortwave? two sets of four tones, repeating) can be gleaned through the storm. A marvelous work. I get the sense of more radio involvement in "study for a lighthouse", a bristling sound essay full of both intense activity and plenty of air, the sonorities several plies deep, with a series of five, sharp, hard "taps" repeatedly establishing a harsh surface while hisses, gurgling and perhaps faint voices occupy strata beneath; entirely absorbing. In "1897 (song for Richard Henry), McIntyre unsheathes her "broken violin", wending it through wooly masses of static, birds and (there must be a better name for it) the "woo-woo" you get on shortwaves, normally a sound I'm not terribly fond of (too much baggage) but here, it just manages to fit in. The violin is dark and a bit mournful, evoking an off-tune sea shanty, perhaps, though that thought might be influenced by the preceding nautical imagery. 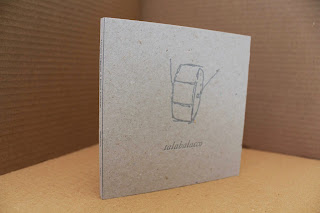 Recorded separately, using synths and objects (though the overall cast of the piece is percussive), recombined at a later date, with a very clean, clear sound and including a fair amount of silence. It's fine though I can't say it grabbed e especially. This practice is entering middle age, at least (I think my first file sharing exposure was Otomo and Carl Stone's "Amino Argot" back around the mid 90s) and I often to find it somewhat lacking barring an overarching, at least tenuously cohesive idea as was the case, for example, in MIMEO's "sight", at the behest of Keith Rowe. Any sounds can be molded after the fact, of course, and often, as here, the results are unobjectionable and even reasonably enjoyable on their own merits. That's one way to view them, to be sure, distancing oneself and regarding the activity in a Cagean way but after a while, I admit, this begins to be something of a chore. Not to particularly take this release to account, just mentioning the sort of thoughts that routinely pass through my noggin while listening. Things are kept on a generally low boil here, full of medium level knocks, taps, squeaks and scratches. The silences act to create a kind of episodic character but there's (intentionally, I assume) no discernible structural, much less narrative idea in play, just sequences of sounds, which is enough sometimes; other times, one hankers for a bit more.