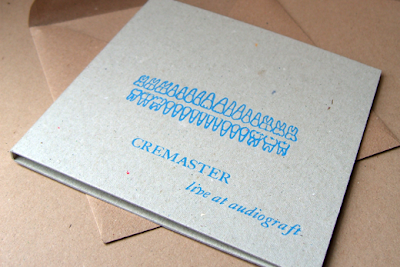 An unruly, nodose nugget of sound from our old friends Alfredo Costa- Monteiro (electroacoustic devices) and Ferran Fages (feedback, mixing board, electroacoustic devices) in this set from just over three months ago as I write. Ungainly too, very tough to get one's ears around, the sounds veering between keens and deep thuds, often at the same time, giving one only the merest glimpses of any "true" form, like shapes seen in flashes of light. I've gone back and forth over the course of the half dozen listens I've given it (it's only 26 1/2 minutes long), often discovering new elements or relationships between same that tend to "cement" a given section for me even as another adjacent one might crumble. Kind of fascinating, that. It's certainly a rough go, though in a purely sonic sense, not as harsh as your average balloon and needle release, say; there's more of a molded feel here, with a very rich range of sources. That mght be the thing, that it steers one toward certain expectations as to how the whole will somehow come into focus but it never quite does. It comes this close to degenerating into a random enough conglomeration to cause the throwing up of hands, but never quite does that either. That, in the last five or six minutes, things begin to jell, erm, "traditionally", only reinforces the gnarliness of the first 20 minutes. It's all quite frustrating!

I guess that means it's pretty good work, causing this listener to think a fair amount and to doubt his thoughts. 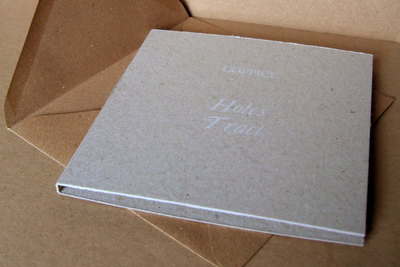 Noé Cuéllar and Joseph Kramer are Coppice, using shruti box, filters and tapes. It an agreeable and yummy mix of sounds, generally, the reedy drones of the mini-organ (along with, I think, other extended sounds derived therefrom) bump up against the electronics, the latter often clunky and pleasingly awkward. Where the various whooshes and other elements arise from, I'm rarely certain. The music is loose, sometimes a bit too much so perhaps and there's a small tendency toward meandering--some editing, live or post may have helped--but it regularly rights ship and passes some intriguing shores before winding up and, in toto, the disc progresses well, cresting toward the end. Rhythms are introduced on occasion, but they're the result of the internal workings of the machines involved more than the instincts of the players, an effect that serves to cast a good, icy pall over some minutes here. Overall, it strikes me as akin to the music produced by the younger NYC-based denizens of the eai world over the past few years, which is to say, adventurous with some very good ideas, not always fully formed but not bad at all and well worth watching.